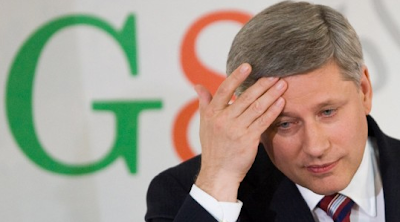 A scan of what's going on with all things boondoggly, still the big story of the day.

1. The Conservatives know they're in trouble and are doing what they do best, media relations! Quick, men, assemble a p.r. army!

The prime minister, his top communications advisers and more than a dozen tourism and private-sector executives were dispatched Tuesday to set the media straight.

Reporters from every news organization on Parliament Hill were given an hour's notice to come to the Langevin Bloc housing the prime minister's office and listen to a bid to defend the marketing pavilion and artificial pond the government is building inside the media centre for the G8 and G20 summits.

2. But indications are that Canadians aren't buying the Conservatives' spin on the cost of the summit:"Canadians question summit cost: poll." The soaring costs in comparison to other nations are stark. This is not a tough one. Good work Canadians.

3. Shout out to another lyricist out there! This one is approaching poetry: "The Wreck Of the Conservative Party." All the great Canadian artists are being spoofed in the boondoggle cause.

4. A few fun letters from the Globe today on the fake lakemania that's sweeping the nation:

I hear the Conservative PR machine is planning the introduction of a new magazine that will highlight the party’s achievements during the G8-G20 summits. It’s to be called Harper’s Bizarre, and the first issue will feature a cover story on the new Toronto lake.

Harper's Bizarre, I like it! (Exclamation points go well with boondoggles!)

Oh! And look who's there too, one of our favourites:

We are Canada. You know, the country with the greatest bodies of fresh water in the world. Ontario has about a quarter million of them – large and small. So, of course, the Harper government has to spend $2-million for a fake lake.

Industry Minister Tony Clement may wish to view the lake as a “reflective pool” (Harper Tories Pounce On Ignatieff’s Leadership – June 8), but to many Canadians, it will be viewed as the perfect metaphor for the Harper government: shallow, artificial and costly.

There's something about lakes being quintessentially Canadian here that is resonating. The Harpos with their obsession for Canadian symbols missed it. Because that's all fake too.

5. And if you missed it, CBC had a report last night that really brings home the pork barrel aspect of all this, watch for the map with all the millions being spread around Tony Clement's riding. All at a time when we're supposed to be concerned with fiscal restraint. Not feelin' it, Conservatives.
Posted by Nancy Leblanc at 6/09/2010 08:55:00 AM