Interesting timing on this one. Sun Media has been leaked a document with contractual terms pertaining to F-35 supplier deals in Canada that appear to conflict with the terms of the 2006 Memorandum of Understanding signed by Canada, at the national level. Appear to. Not so sure they do but they are being spun that way. Here's what Sun Media is reporting:

In a section on requirements for a supply contract to remain in force, the memo lists several stipulations including: “C. the Government of Canada remains a Level 3 participant and procures JSF Aircraft as currently reflected in the JSF PSFD MOU dated December 31st, 2006.”

The document was provided to QMI Agency by an industry source on the same day Liberal Leader Michael Ignatieff promised to cancel the order of 65 jets if he forms government after the next election.

Not having read the whole thing, it's hard to say whether any other terms expand upon the clause "C" above.

But it is possible to read that clause as consistent with the 2006 MOU. The term of that agreement is 49 years (I believe) and its purpose is indeed to permit Canadian companies to bid on JSF work with Canada as a participant. So Canada can remain a participant, irrespective of whether it buys the F-35 or not (see post this a.m. for more). The latter part of that clause, that reads Canada "...procures JSF Aircraft as currently reflected in the JSF PSFD MOU dated December 31st, 2006," means that yes, Canada, if it procures, procures in accordance with that MOU. I can see why indeed companies and those seeking to press on with the sole-sourced deal are reading this clause "C" as a mandatory requirement to buy the F-35s.

But the MOU provides for Canada and any other nation to engage in its own particular procurement process (clause 3.2.1.1.1). The Conservatives have chosen to indicate that they will sole-source the F-35s from Lockheed Martin. The Liberals are saying that if they form government, they will hold a competitive process. So I'm not sure how this clause above changes that. Here is 3.2.1.1.1: 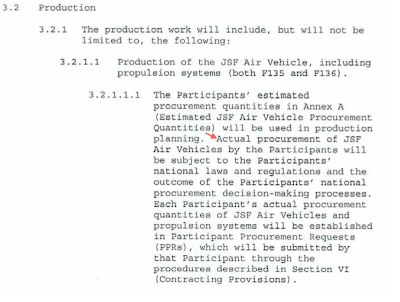 That reads that actual procurement is subject to the outcome of each participants' national procurement decision-making processes. The outcome in any given nation might be to say no. Or to buy less. Like the British seem to be doing and the Dutch and Norway. But Canada seems to be skipping this step of having a procurement process. Recall that the Department of National Defence was contemplating having a competition for the jet purchase, planning for one, according to its own documents. That is something we can do because as we know, there is no contract to buy the F-35s in existence right now and won't be until at least 2013. A lot of the media reporting, including the Sun Media report, seems premised on the fact that a deal would be cancelled. There is no deal.

Something else to think about is just what is being apparently floated here. That Lockheed Martin, presently under tremendous cost pressures from the Pentagon, would be likely to axe current suppliers in the JSF programme, including the Canadian ones, and re-obtain new suppliers from elsewhere. That would seem to be an additionally costly proposition but anything's possible.

Beyond all the contractual interpretation is the dynamic we're seeing here. These contracts between Lockheed Martin and the suppliers seem designed to pressure the government of Canada into buying the F-35. Locking us in, in a sense. But the 2006 MOU is the governing agreement Canada has. Lockheed Martin and its suppliers are free, obviously, to contract for whatever stipulations they want. What a Canadian government will ultimately do is up to the government, not the contractual requirements of third parties.
Posted by Nancy Leblanc at 10/27/2010 08:20:00 PM