The pathetic desperation evident in the White House's mission to make Bush appear relevant to the Rita disaster response is on display all day today for those following the scene, Under fire, Bush says feds well prepared for Rita.

How exactly was anyone helped by Bush observing the military at the "Northern Command?" Listen to what he was doing, according to Bush and his press secretary, who must be present to finalize thoughts uttered by Bush:

On plasma screens in a conference room at the base, Bush received a briefing on Rita's path and impact, and on how troops were being used to aid in the recovery effort. He said he wanted to see "first hand" the military's disaster planning.

White House spokesman Scott McClellan said Bush believes that coordination "is going well between all levels of government," but that the president was concerned about the risk of more severe flooding.

"It's important to continue that coordination and make sure we're doing all we can to assist. So in that sense, he's received good reports from all our officials," McClellan told reporters.

So how exactly does this help? Sounds like he's once again the passive observer, the briefee-in-chief - on the scene, but just listening, taking it all in. Watching the coverage on plasma in a conference room...and since apparently, the coordination among levels of government is A-OK, the military were all in place then what exactly does Bush bring to the table? Other than being present for photo ops?

Just one of many, sitting in a room... 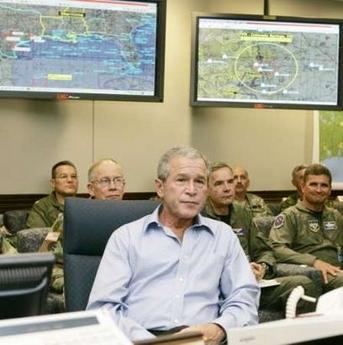 And here is some new spin. "Fact-finding" is the new spin on Bush being briefed. Makes it sound like his passivity is actually activity. Just listen to his press secretary set it up:

The Northern Command was created in 2002 to head the military's land, sea and air defense of the United States. Bush has proposed that the military have broader responsibility to respond to domestic crises like hurricanes.

McClellan said Bush was doing fact-finding on the issue of lines of authority in disasters and plans to talk to members of Congress about some possible changes.