Thought I would write down a few impressions on the leader's debate this past evening. Yes, I actually managed to get through it. Figured after all the travel of late and attention to things American, it's about time I paid due attention to our own landscape. So, here are some random observations on the spectacle:

Stephen Harper just doesn't want this badly enough. He is not passionate enough about wanting this job. I question why someone who is as passive as he is about the country wants to be PM, to be frank. He's worse than Dalton McGuinty in this respect. A technocrat with no real passion or vision. There's a real inability to inspire here. I think he'd be an adequate Auditor General (the office I suspect he'd secretly like to have) but not a good PM.

At the end of the debate, when asked what is his vision of Canada in 50 years time, to inspire young Canadians, prompted by the young woman questioner from B.C., he initially responded by mumbling about Canada's natural resources and incredible land mass. From there he went on, but awkwardly, like he was making it up as he went, as if it's a struggle for him to muster up some kind of vision. Like it was embarrassing or something.

And he continuously faded into the awkward grin thing at the end of each statement. Trying to increase a likability factor, clearly, but it just seems to bolster his odd quotient.

Overall, my verdict on Harper is that he didn't try hard enough. He needed to step up and grab this thing and he seems afraid to do so. I get the sense that he knows that he could win, but deep down, doesn't really want to win. And so it's a subtle form of self-sabotage that we're watching. 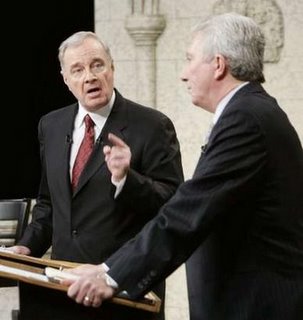 Because Harper didn't show, Martin was the clear winner. He won despite the fact that for much of the debate, he was good but not great. But he had at least 3 shining moments where he did what Harper didn't or couldn't. That is, he got passionate about some principles. The 3 instances I counted were the following: his redressing Harper on not standing up for the Charter as a potential PM and hammering him on his inconsistent gay marriage stance; his riveting lecture to the separatist on the stage about breaking up "my country" and serving notice that he's going to stand up vigorously on this issue; and the third, perhaps not the strongest moment, his articulation of a vision of Canada that was noticeably better than that offered by the technocrats Harper and Layton.

Martin seems to have settled into the role of PM, much more so than in previous debates and last night, at least, seemed to wear it well. Whether anyone is paying enough attention now is another question.
Posted by Nancy Leblanc at 12/16/2005 10:48:00 PM