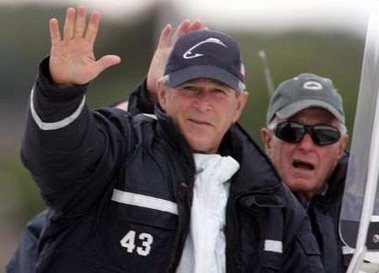 "Junior Needs a Spanking" writes Maureen Dowd today, on the occasion of the surf and turf weekend family visit in Maine. She loves this Bush family dynamic and it shows. A comical excerpt:

The Old King put the Boy King over his knee yesterday and gave him a good thwack with a lobster-shaped paddle.

Junior certainly deserves it, with recent attempts to blame his dad for policies that led to 9/11 and the rise of Osama and Middle East terrorism.

As with so many things about this byzantine, Shakespearean relationship between father and son, reunited here at last for a wedding, a christening and a funeral this weekend, it’s an ironic turn of events.

And some serious perspective on W's Iraq mess, including a quote from an unnamed former Bush I official:

The Bush I inner circle whispers that W. and Condi are “in over their heads,” as one told me, and that without 41, Jim Baker and Brent Scowcroft around, there is no one to “corral” Dick Cheney from his hard-line craziness.

“They misread history,” said one Bush I foreign policy official. “43’s born-again background and lack of experience and simple view of the world made him think it was easy to define who the enemy is. But hope is not a policy — hoping to win, hoping to make a democracy. They came in with the philosophy that the U.S. was the most powerful country in the world and they could remake the world any way they wanted. Condi and others assumed that the Middle East would fall apart peacefully, the way the Soviet Union did, if given a chance. But the Middle East is a totally different place.”

They agree, as one said, that 41 is a “very private guy who loves his son dearly, and you will not catch any daylight between them. I doubt that he’s taking any joy from the fact it’s clear now that he did the right thing in ’91 and his son is screwing up.” (emphasis added)

These "whisperings" are hardly surprising given the completely different approaches of the Bush 41 administration and Bush 43. They're maddeningly frustrating but glad to see some public airing of those whispers. This is big news to read such a public indictment of W by a Bush I insider. Let's hope that there is also some much-needed fatherly advice being imparted this weekend, as the rich-and-famous tool around Kennebunkport in their matching hats and windbreakers:

At this hazardous moment in world history, somebody has got to grab the stubborn, shuttered scion wearing the “43” windbreaker and talk some sense into him, the way Dwight Eisenhower did when he privately dressed down the young J.F.K. after the Bay of Pigs fiasco. And who better than his dad, that 82-year-old still demonically driving his cigarette boat around the Bay of Bushes?