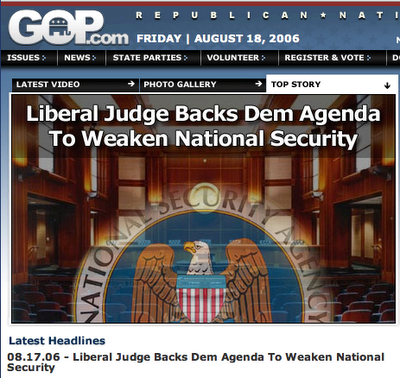 Another outrageous attack by Republicans on "liberal judges." The RNC knows no shame. Bush's NSA warrantless wiretapping ruled illegal, have no fear, the RNC is on the job to smear the judge. Can't win by arguing substantively that the judge was wrong. Because Bush has the power to wiretap with a warrant if it's approved by the FISA court. But Bush decided to ignore the FISA provisions and was called on it, finally, by a federal judge. Cue the smear of the judge politically in a forum where she can't defend herself. Nice.