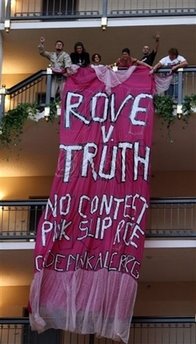 "Presidential adviser Karl Rove criticized a federal judge's order for an immediate end to the government's warrantless surveillance program, saying Wednesday such a program might have prevented the Sept. 11 terrorist attacks.

Rove said the government should be free to listen if al-Qaida is calling someone within the U.S.

'Imagine if we could have done that before 9/11. It might have been a different outcome,' he said."

Yeah, you could have done that. It's called FISA. Al Qaeda was a known terrorist group that had threatened the U.S.. They had bombed the U.S.S. Cole in the fall of 2000. But Rove and Bush didn't pay enough attention to the al Qaeda threat despite repeated warnings. So this is a bit of hindsight grandstanding, to say the least.

Besides, he's obfuscating again. The point of the judge's ruling was that there was no legal authority for Bush's program. So they can criticize the judge all they want and muse about how such a program could have prevented 9/11. It has to be a legal program, through the existing FISA regime or a new statutory regime approved by Congress. Absent those things, they're acting lawlessly. I don't think anyone disagrees with the idea of listening in on al Qaeda. But Rove sure as heck makes it sound like the judge does.

And to think, I was wondering today who else might pile on to the Judge who dared rule Bush's warrantless wiretapping illegal. Question answered!
Posted by Nancy Leblanc at 8/24/2006 05:33:00 AM