Bush does his escalation thing 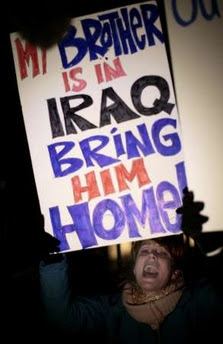 Adding 20,000 Troops to Baghdad. As was highlighted by Keith Olbermann and Chris Matthews last night as they reacted to Bush's speech, Bush appears to be opening up a new front in this war. 20,000 troops to Baghdad may seem like nothing if this thing really expands. This is how the Post put it:

Bush had tough words for Iran and Syria. In stark contrast to the Iraqi Study Group's recommendations last month, the Bush administration intends to increase its operations against both countries, Bush said. He vowed to "interrupt the flow of support" from Iraq's two key neighbors and to "seek out and destroy" networks providing weapons and training to U.S. enemies in Iraq.

"Succeeding in Iraq also requires defending its territorial integrity, and stabilizing the region in the face of the extremist challenge. This begins with addressing Iran and Syria," he said.

In a clear warning to the hard-line government of Iranian President Mahmoud Ahmadinejad, Bush also announced that the United States will deploy Patriot air defense systems and expand intelligence sharing "to reassure our friends and allies."

Seek out and destroy...does that include entering Iran and Syria? Here's how the NYTimes puts it:

He left deliberately vague the question of whether those operations would be limited to Iraq or conducted elsewhere, and said he had ordered the previously reported deployment of a new aircraft carrier strike group to the region, where it is in easy reach of Iranian territory.

Are we seeing the beginnings of this strategy today? An Iranian office in Iraq was raided by U.S. forces today. The Iranians are protesting to the Iraqi government. Iranian staffers were taken away by U.S. forces. Looks like Bush is collecting leverage. 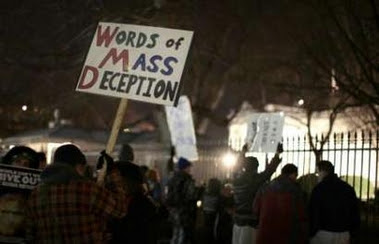 The NY Times also gives a flavour of Bush's testy mood leading up to his speech, showing the pressure that comes when you're in a box like this:

He put it far more bluntly when leaders of Congress visited the White House earlier on Wednesday. “I said to Maliki this has to work or you’re out,” the president told the Congressional leaders, according to two officials who were in the room. Pressed on why he thought this strategy would succeed where previous efforts had failed, Mr. Bush shot back: “Because it has to.”

That's not an answer, oh imperious one. I wonder if he can answer that question. By the way, the comments on the Times article by readers are scathing. Some commenting along the lines of this guy: 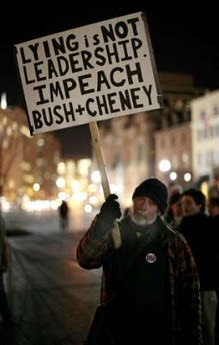