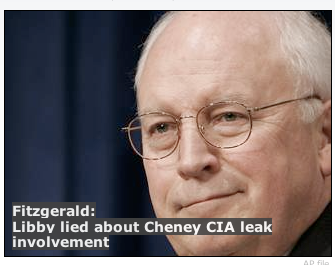 Big news is that Libby is claiming he's being scapegoated by the White House for the leak of Valerie Wilson's CIA operative status in order to protect Karl Rove. From MSNBC:

Attorney Theodore Wells said Libby went to Cheney in 2003 and complained that the White House was subtly blaming him for leaking Plame’s identity to columnist Robert Novak.

“They’re trying to set me up. They want me to be the sacrificial lamb,” Wells said, recalling the alleged conversation between Libby and Cheney. “I will not be sacrificed so Karl Rove can be protected.”

When you work in a den of snakes, what can one expect when everyone's back is against the wall? A circular pointing squad.

And Cheney's involvement in the leak is being portrayed as "deep." Confirming suspicions many have had all along. MSNBC is reporting on the opening statements and a kos blogger transcribes it:

The prosecuters will also show that it was VP Cheney who directed Scooter Libby on how to handle the media inquiries on the Wilsons, on Joe Wilson's criticisms, that was a violation of protocal. In addition, prosecutors are alleging that VP Cheney himself wrote out for Scooter Libby what he should say to one of the cruicial reporters in the case and it was during that conversation with the reporter when Scooter Libby gave the confirmation to that reporter that Valerie Wilson was undercover at the CIA.

There was other information that was damaging to the Vice President concerning the State of the Union and the false claim that was made. The prosecutors say the evidence will make it clear that VP Cheney asked the Director of the CIA George Tenet to take complete responsiblity for the mistake and to make it clear that the VP and the president were not involved...

There was a note that VP Cheney wrote to Scooter Libby about how Libby should handle this matter, that Scooter Libby, according to prosecutors, destroyed just before Scooter Libby testified to the FBI where Libby allegedly lied about his dealings with reporters. It is damaging information about this Vice President, politically, it could also be a big deal as far as this trial is concerned.

[Update: Shuster now says the phrase Fitzgerald used was: Wiped out (as in from memory), not destroyed, and he reports that the note itself was found in Libby's files]