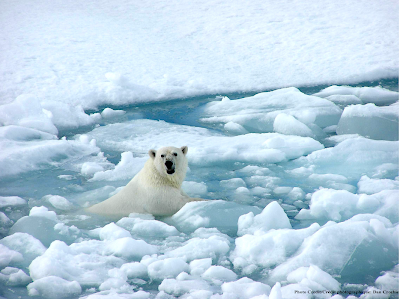 The NYTimes with a reminder to the new Senate leadership of the need to act on the environment and some recent facts supporting their call:

Here are a few bulletins from planet Earth:

Dec. 12 — Exhaustive computer simulations carried out at the National Center for Atmospheric Research in Boulder, Colo., suggest that the Arctic Ocean will be mostly open water in the summer of 2040 — several decades earlier than expected. Scientists attribute the loss of summer ice largely to the buildup of carbon dioxide and other man-made greenhouse gases in the atmosphere.

Dec. 14 — Experts at NASA’s Goddard Institute predict that 2006 will be the fifth-warmest year since modern record-keeping began, continuing a decades-long global warming trend caused, again, by the buildup of man-made carbon dioxide.

Dec. 27 — The Interior Department proposes adding polar bears to the list of threatened species because of the accelerating loss of the Arctic ice that is the bears’ habitat. The department does not take a position on why the ice is melting, but studies supporting the proposed listing identify greenhouse gases as the main culprit, adding that if left unchecked these gases will create ice-free Arctic summers in three decades.

How's that for a kick in the pants to start your Saturday?