Speaker Nancy Pelosi is right on 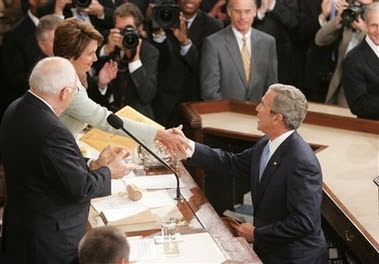 Speaker Pelosi looks like she's right on top of everything Bush is saying. She's ready to applaud, shift her eyes, blink with disapproval or acknowledgement at just the right time. She's got the expressive looks down pat! It's like she's visibly representing everyone who opposes Bush. It is making listening to this imbecile entirely bearable.

What a welcome change.

Btw, I'm now hearing the part where W scares the sh*t out of the world...citing all the foiled terror attacks - this will be fact checked no doubt, can you believe anything he says anymore? Did you catch the mention once again of the foiled plot to crash an airliner into the tallest building on the west coast? Using this classified information once again for political gain, for an applause line, to scare Americans.

Sunnis and Shiites are part of the same totalitarian threat? Kill on an even more horrific scale? WTF is he talking about? Elevating them to al Qaeda's status?