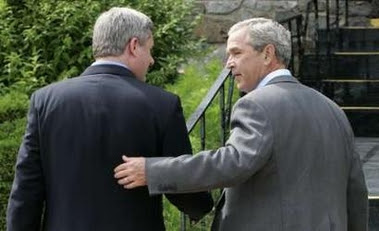 Literally and metaphorically, today. Well done, W. That's just the kind of picture we like to see. Bet the PMO loves this one!

And what does our PM have to say about protesters exercising their democratic rights to freedom of association and freedom of speech by protesting at this meeting?

Asked about the protests against the summit, Mr. Harper told reporters as he greeted Mr. Bush, "I heard it's nothing," then added. "It's sad."

"It's sad?" Another one of those careless throwaway comments that provides us with great insight into the mind of Steve Harper. I'd say there's a bit of contempt in these words toward the protesters, condescending actually. That's our PM's view of such a protest. Completely oblivious to the feelings of the majority of Canadians toward one of the most reviled world leaders in attendance on our soil. Protesting his presence is not "sad." It's exactly the right thing to do, to show Bush that he's not going to get passive ambivalence from us. He's going to get exactly what he deserves. A show of opposition.