Further to Aaron Wherry's post a little while ago on Poilievre having cited in the House of Commons today the "Report of the Chief Electoral Officer of Canada on the 36th General Election," and Appendix D, at pages 91-92 as authority for the Conservatives scheme, a few points.

Here's what's in Appendix D, filed by the Broadcast Arbitrator, that Poilievre is citing: 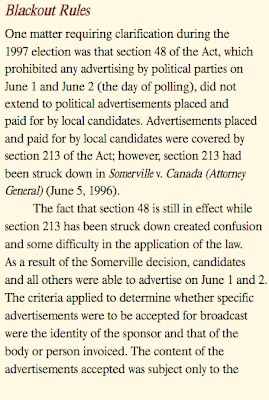 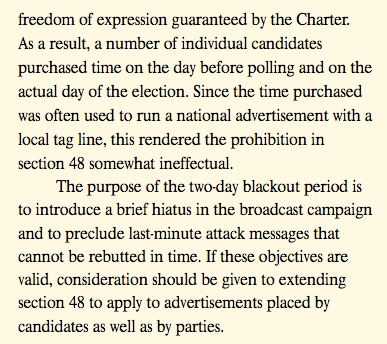 Section 48 was the section of the Canada Elections Act that appears to have been in question then. It dealt with blackouts on advertising. It prohibited advertising on the days around election day except by local candidates. So apparently ads were being run by some national party, locally, but with local tag-lines. The arbitrator suggests that it was allowed. And recommended that the loophole be closed. 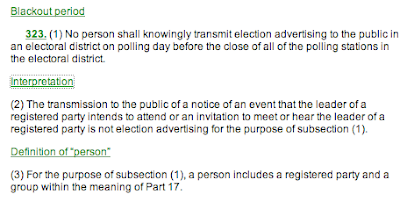 It appears that the loophole was closed.

Poilievre's argument seems to be that this was how a party(s) got around this particular prohibition under the previous iteration of the Elections Act, therefore the Conservatives were free to try to do the same thing in 2006 in connection with other prohibitions in the act, namely spending. So a practice that was stopped in relation to one part of the act, the Conservatives apparently viewed as A-OK to try again because in their view, a loophole existed on national versus local advertising.

The problem for the Conservatives is this:

And the facts and circumstances supporting these allegations: