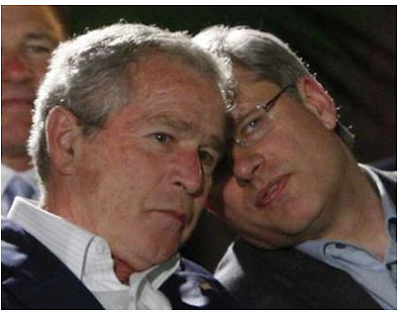 Or how 'bout this one: 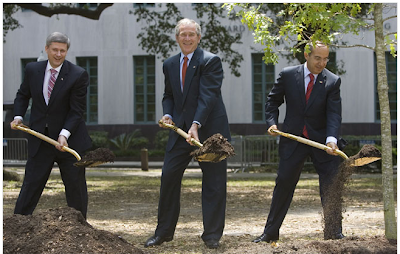 Yep, there was some serious s*%# shovelled yesterday by our PM, and I'm not just talking about the photo:

President Bush pulled the leaders of Mexico and Canada into an unusually direct involvement in his domestic political efforts to expand free trade on Tuesday when his two North American allies joined him in a foray into both Congressional politics and the presidential campaign.

President Felipe Calderón of Mexico and Prime Minister Stephen Harper of Canada lent their weight to what has been something of a lonely campaign by the president as he has traveled the country to make pro-trade speeches and angry statements about the “petty politics” that he sees threatening one of his administration’s major legacies.

They joined Mr. Bush in sharply criticizing a decision by the House speaker, Nancy Pelosi, to scuttle a vote on a free trade agreement with Colombia. And indirectly but unmistakably, they rebuffed calls by the two Democratic presidential candidates to renegotiate the North American Free Trade Agreement, or Nafta.

Um, interfere much? How helpful Mr. Harper was in providing this assist to Bush yesterday. I think we all just need to picture the converse, Mr. Bush coming to town and making similar sorts of comments in the midst of a domestic Canadian debate over a major international agreement to think through what kind of reception such remarks received. To put it mildly, they wouldn't be welcomed here. Especially when offered on the day of a significant political election. No matter for our fearless PM, however, they've already dipped their toes in the water and apparently, it's still warm, despite his protestations of staying above the fray. Harper's foray, however, is going over quite well in dyed-in-the-wool land.

And bonus assist by the PM to Mr. Bush on the Colombia free trade deal:

Both leaders also echoed Mr. Bush’s warnings that rejecting a free trade agreement with Colombia would undercut not only economies in the region, but also its security.