Has Harpie been consulting with Frank Luntz again...

He's so clever...I mean, really. Great moments in Prime Ministerial speeches and all that.

What is more interesting is the American terminology that Steve is injecting into our politics:

“Put simply, we cannot let the Liberals take this country back to the tax-and-spend policies of the past.”

This "tax-and-spend liberal" charge is a typical Republican line of attack against Democrats.

It appears that what Harper is trying to do, in Canada, is what the American conservative ideologues have done in the U.S., i.e., demonize the term Liberal by infusing the Liberal brand with similar connotations to the above, in particular the tax-and-spend charge. We don't call him Mini Bush around here without good reason, don't ya know. What's ironic, however, in Harper attempting to do so is the recent track record in both Canada and the U.S. of those darned "liberals" stacked up against the Republican/Conservative charge. It has been lampooned recently in the U.S.: 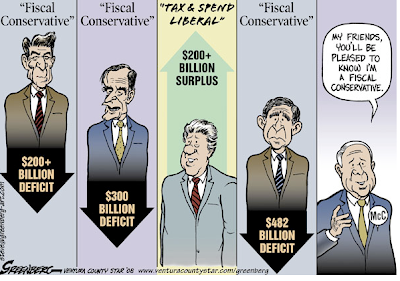 See also my post from last night, citing the Canadian Taxpayer's Federation's slamming of Harper's inordinate spending as compared to the Chretien Liberals, $3 plus billion just this summer as he and his ministers fan out across the country dropping millions here and there. The spending undertaken by Harper to fuel his whopping low 30's poll numbers has been massive.

But I guess to Harper, if he says "tax-and-spend Liberal" enough, people will think it's true. Because geniuses like Frank Luntz tell him to do so. In fact, given Harper's nifty little word games, I wonder if Mr. Luntz, that great Republican consultant and language twister, is on retainer for Mini Bush just about now in order to poison our own imminent campaign...
Posted by Nancy Leblanc at 8/15/2008 07:08:00 AM