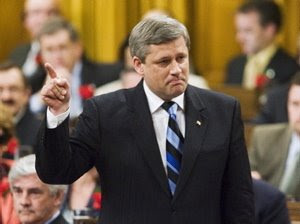 Noticed in media reports today, the he's-scary-and-everyone-knows-it strategy being cited once again by unknown Conservatives:

"'Love him or hate him, our Prime Minister knows where he stands on the issues and will offer Canadians certainty,' a senior Tory official said."

Hmmm...there's a very prominent world leader who has been gracing our lives for the past eight years who has been described in exactly the same manner. I think Stephen Colbert lampooned this ridiculous rationale for supporting such a leader quite appropriately at his White House Correspondent's dinner appearance :

"The greatest thing about this man is he's steady," Colbert continued, in a nod to George W. Bush. "You know where he stands. He believes the same thing Wednesday that he believed on Monday, no matter what happened Tuesday."

The fallacy of equating certainty of position with strong leadership has been proven to be demonstrably false by the Bush administration. But if the Harper team wants to have that debate in that construct, running the Bush 2004 campaign, more power to them.

The style of leadership of Stephen Harper is a debate that opposing parties should welcome. Every facet of that leadership style should get a good and proper vetting from media and opponents alike. Does he set the right tone at the top? Does he trust and use his Ministers well? Is he honest, trustworthy and accountable? Does he have a vision? Is there an open climate of healthy political debate fostered by the leader? These are some of the aspects of leadership that should be discussed in this debate on leadership. Knowing one's positions is one thing. It's how you go about inspiring others to follow and subsequently executing those policies that also make up leadership.