You'd think that with a national health crisis they'd have some real work to do...

But you would be wrong! The Privy Council Office, dedicated public servants that they are, have their eyes trained on Errol Mendes today. No doubt due to his op-ed in yesterday's Ottawa Citizen tearing Harpie a new one for his imminent law breaking election call. Looks like they're gearing up to diminish Professor Mendes' views by linking him to the Liberal party. Because critical thinkers opposed to Harpie must be Liberal partisans, right? Wrong. 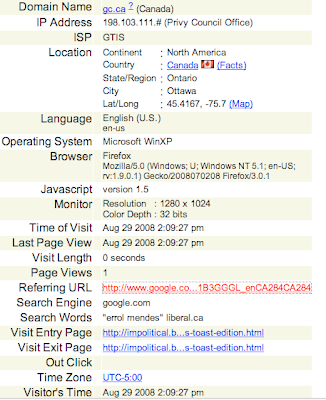 Now that we're on the topic...Mendes planted an interesting suggestion in that piece yesterday:

Even if the fixed elections law does not constrain the governor general's discretion to grant dissolution of Parliament, one could argue that the law constrains the prime minister's power to ask for one until October 2009. Hiding under the political constraints of the governor general's residual power is nevertheless a violation of a statute. Some aggrieved citizen may even consider seeking court action to stop this legally dubious move.

There must be some enterprising citizen that aspires to give Harpie fits and draw further attention to the move...
Posted by Nancy Leblanc at 8/29/2008 03:56:00 PM