A few items this morning...

The Strategic Counsel "battleground" polling continues to provide entertainment: "Harper considered 'nastiest' leader in swing ridings." The sample sizes here continue to amaze, 480 people in 20 ridings in Ontario, for example, over 4 days, so again, it's all grain of salt stuff. Harper manages to "win" the "nastiest" leader contest by a walk, however, in both Quebec and Ontario.

Also interesting, but still in margin of error territory, the Liberals are up 5 points in B.C. in those battlegrounds while both the Conservatives and NDP have fallen in them. Volatility. If this poll is going to be foisted upon us, might as well deal with it...

Secondly, of note in the Quebec media this morning, a story about NDP MP Tom Mulcair and his past as a provincial Quebec cabinet minister coming back to haunt him. There's a front page story in Le Devoir about his involvement in preventing the funding of a climate change action group while he was Minister of Environment in Quebec in 2006: "Mulcair hante par son passe de ministre." (I wish I knew how to do accents in Blogger, my apologies.) Emails obtained by Le Devoir aren't that flattering to Mr. Mulcair and given the subject matter, this could make a difference in the campaign in Quebec for the NDP. 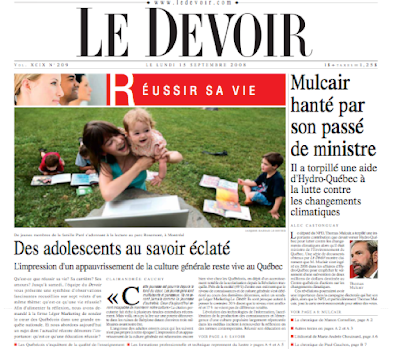