What do Sarah Palin and Dona Cadman have in common?

It's that thing called public accountability. (What did you think I was going to say...lipstick?) You know, talking to the media and such. Whatever has happened to our North American democracies that are supposed to be beacons of freedoms, yet where conservative directing minds are telling the public, no, you can't hear from your candidates. We're just going to shove them down your throats in a highly stage managed form of TV show. And when they do speak, it's a rare event we're all on tenterhooks for... we're left wondering when it will happen again. Other than the PM, and a few appearances by Kenney, Baird and Cannon in the national Conservative theatre, Conservative candidates are generally kept under wraps. I think it's high time to rebel against such techniques and vote accordingly.

Let's start here, with a comic introduction to the Harper campaign in a nutshell. A short but funny video on life in the bubble for Mr. Harper...:)

As introduced above, this is really an issue that deserves some scrutiny in this campaign. It's not just about political optics, the backroom stage management of campaigns. As the reports tell us, Mr. Harper is conducting his campaign in a bubble, guarded by RCMP who seem to now be majoring in media relations as well. There's a concerted effort to prevent interaction with Conservative candidates:

Rallies are off-limits for any member of the public who just shows up. Nobody gets in unless they have been pre-registered by the local riding association. Even local media are asked to sign up in advance.

Anyone wanting to attend an event featuring Harper has to have his or her name vetted by the RCMP, said a source at Conservative campaign headquarters, who would only talk on background yesterday. He said this rule applies even outside the campaign period, so no one – even a staffer not scheduled to be there – can show up unannounced at a Harper speech and expect to be let in.

The Harper campaign keeps a short leash on national and local media, limiting questions and access to local candidates, sometimes calling on RCMP security to block reporters from doing their jobs.

A blatant example of the unfriendly Conservatives in action, toward the media and public, occurred the other night in the Dona Cadman incident receiving more attention now:

Tensions peaked Tuesday night in Surrey, B.C., when Conservatives called on the RCMP to shield Harper and local candidate Dona Cadman after a partisan rally.

Cadman, a candidate in Surrey North, has been mum since alleging months ago that top party officials offered her dying husband, independent MP Chuck Cadman, a $1 million life-insurance policy if he would cast his vote to topple the former Paul Martin Liberal government in May 2005.

When reporters tried to speak to Cadman this week, Harper's staff ordered the RCMP to block journalists, and she was whisked away.

"Keep them out!" an aide shouted to the police officers.

See the Conservative response? In our democracy, this is all perfectly acceptable, the Conservative spokesthingy assures us. Candidates don't talk to the media. We subscribe to the Sarah Palin school of campaigns. Media? No, thank you.

The Conservative instinct to hide their people from the public...all of which can be summed up in that wonderful piece of art by my friend the Wingnuterer: 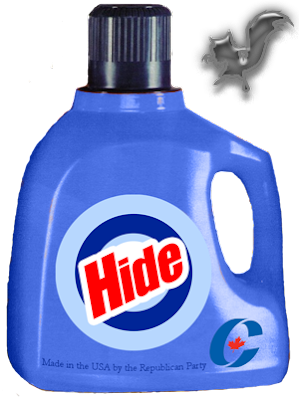