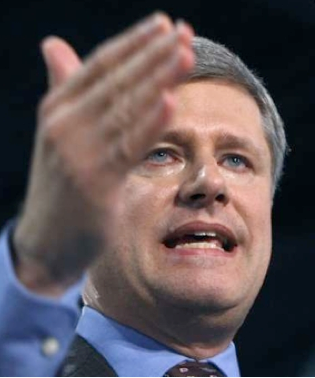 Not exactly the kind of day you want to have at campaign's end. An insightful Globe report this afternoon on Harper's day in la belle province where signs of dwindling support in Quebec are noted:

The Tory Leader's final rally in Quebec was showing signs of flagging support for the Conservatives. He only drew about 600 for the event at a Quebec City convention centre Sunday afternoon instead of the 2,000 the Tories said would attend from an area where the Conservatives won many Quebec seats in 2006.

He spoke to "...a subdued crowd of 250 in Saint-Tite, Que., Sunday morning." Further, he continues to bring the crazy talk, with its air of desperation:

“The leader of the Bloc has called me all sorts of names … He says that I am the devil himself – the devil who is going to take you straight to hell. A devil in a cowboy hat,” Mr. Harper said.

“He says also that because I come from Alberta, that I serve the oil companies. That's like saying all Quebeckers are maple syrup producers,” he said.

“Fortunately Quebeckers … are a practical and tolerant people.”

Yes, unlike a certain other person flailing wildly at this point.

Also noted in the report, Harper's refusal to speak with reporters.

His Conservative candidate crashing Gilles Duceppe's event in Quebec City seemed mighty desperate as well. Here he is, pictured in the middle, harassing Duceppe. A fitting picture of Conservative temperament captured on the second last day: 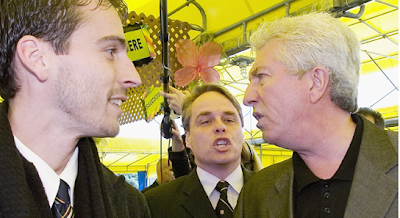 They're really something, these Conservatives. The leader won't speak with reporters and has kept the media at a distance throughout the campaign. He's kept his candidates well-muzzled, yet they conduct themselves like this when the chips are down.