From the Conservative election platform, messaging that completely misses the historic moment (click to enlarge):

The Conservatives don't get the fundamentally new dynamic on the ground that they've injected their platform into at the last minute. The risk to the nation is not the opposition, as he continues to frame it. The risk is an international financial crisis that people are gravely concerned about. That's what's causing economic hardship. It's here. To this, Mr. Harper's response is to flail on about the opposition, as if they're in government. It's like what McCain is doing to Obama now. Obama is too risky. It's partisan politics first, last and always for this guy. Not the nation's business.

The platform, if you scroll through the glossy document, essentially reiterates their campaign announcements. In light of the changed economic situation, some of it seems oddly out of whack now. For example, what good is a tax break on closing costs (p. 11) to buy a house if you can't get the loan from the bank in the first place? It's a nice photo op for Steve, but again, it misses the elephant in the room: 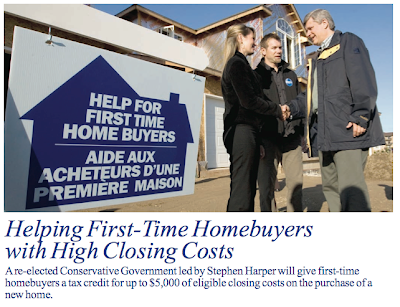 Note also the pictures throughout the platform of election rallies for Harper, further highlighting the last minute nature of this platform (p. 16, p. 21).

And note this rather blunt force positioning on the future of the Senate (p.26). It's not totally unexpected, but it's a reminder of Harper's wrecking ball approach to federalism. Senate reform is a major constitutional change that would likely be met by the opposition of Quebec and Ontario:

Take it or leave it, and expressed in three sentences. Reform or abolish. Note the reference here is to the "Conservatives and Stephen Harper" and throughout the document as well. They won't say "Conservative" without hopelessly intertwining the party's identity with Harper's. It is literally the Stephen Harper party. There is not one photo in this document of anyone other than Stephen Harper. Could be a big mistake.

He's totally undermined his steady, strong leadership theme by releasing this platform a week before the election.

And by the way...whose brilliant idea is it for Harper to keep repeating the "stay the course" line? It's infamously poisonous to repeat when facing a situation that demands change. It can't help but remind people of this: