A mediocre team for challenging times

It's difficult to get excited, at all, about the cabinet announcements today. This is the government Canadians voted for, so line them up and let's see how they execute. The face of the cabinet, while smattered with some new blood, is largely stale. So, here are a few thoughts for those interested...

Flaherty leads the pack in respect of the stale elements. That there are no other competent individuals who could possibly step up and take over from a minister who has so obviously failed is the most telling indictment of the whole effort. To claim that this is in the interest of keeping a steady hand on the economic tiller, as it is repeatedly spun, is a sad state of affairs, indeed.

Other stale members who may not live up to expectations in their new slots:

Clement in Industry. Has Clement ever had an economic portfolio? No, and he hasn't been the swiftest performer to date either.

Cannon in Foreign Affairs. The portfolio that Harper has systematically devalued to such an extent that it hardly matters who he puts there. Cannon joins a long line of mediocrities: MacKay, Bernier, Emerson. None of whom made any difference while there. Cannon looks to be another placeholder continuing to permit Harper to dominate the external face of the nation. And, perhaps the most partisan sort to occupy the position yet, who has exhibited every trait of the submissive Harper ministerial type: 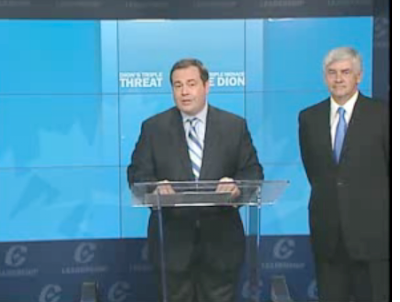 Where's the panache, baby? We've had such a great tradition of Foreign Affairs Ministers in this country...and now, Cannon.

Jim Prentice to Environment. It's almost comic at this point how Prentice is widely viewed as the lone competent in the Harper mix. Is there nothing superman can't do? Give him another tough one, let him prove his leadership mettle is likely what Harper's thinking.

Gerry Ritz stays in Agriculture. For all of the plaudits to Harper today for the injection of more women and the notional good will expressed for a new cabinet...choices like this undermine such sentiments. They say Harper still doesn't fully get it. Ritz is walking proof of that.

Peter Van Loan to Public Safety. Filling Stock's shoes. That sounds about right. The hard core partisans were rewarded. Another indication that the new guard may just end up being the same as the old, tone wise, that is.

Junior stays in Defence. Afghanistan turning for the worse. To oversee our "exit" in 2011 while perhaps President Obama starts pouring in brigades. Should be quite the feat. Another time bomb handed to a possible Harper successor.

On the newbies...
Good luck to them, watch for inevitable growing pains.

What to say to Gary Lunn today who has been demoted and handed...Helena Guergis' old portfolio? Thud. That's the sound of hitting the bottom. The voters of Saanich-Gulf Islands may have been too thick to throw him out, it took Harper to demote him. The irony. Sport may be somewhat of a face-saver given the Olympics and all, but Guergis' old slot? The media coverage of his campaign and its fallout may have impacted on Lunn's fortunes.

Guergis to remain in cabinet and move to Status of Women. Happy to see Guergis, the Palin of the north, remain in cabinet. Small mercies. Not expecting to hear much from her from now on but one can hope. Oh yeah, and on the substance, the women of Canada can expect virtually nothing from this move.