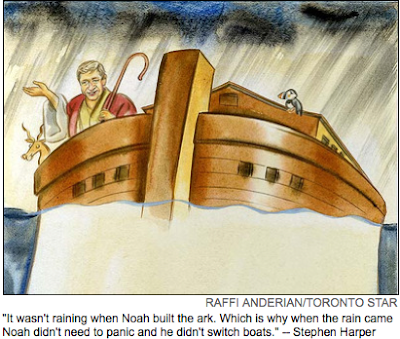 Take in that lovely piece of art work and ponder the hubris of the Prime Minister comparing himself to Noah, a biblical figure out of the Old Testament in this circumstance...just what is the ark that he's built in this here tale?

Now get out there into the stock markets, Canadians, the PM advises it's a great time to jump in!

Still on the economic front, what is going on with the delay to Friday of the latest Canada Savings Bonds? Deficit Jim announced on Tuesday that they would go on sale on Wednesday. This was after they were supposed to go on sale on Monday. But now the Finance Department has announced they're going on sale, for real, on Friday. So Deficit Jim didn't know what he was talking about on Don Newman's show yesterday when he said they'd be on sale today. Who is he, twelfth man on the deal team, last to know? Some have called this delay "unprecedented" and speculate it has to do with the election and sensitivity on the government's part about its entering the market with the bonds at a time when the markets are in turmoil.

Go away, Tom Flanagan. Tell us something we don't know.

Be more like Andrew Steele, who is the best addition to the Globe this election season. Brilliant summation of why the Conservative platform release was a failure.

And on that note, one last thing, a humorous take from Dion last night on the Conservative platform:

In North Bay, Ont., Tuesday night, Dion poked fun at the plan, saying the 44-page document had 22 pictures of Harper and 100 mentions of his name.

"Beyond the words, it's all about him. It's 'me myself and I.' It's about his job," he told the raucous crowd.

"Our plan is about your jobs."