What if the race really shifted and nobody reported on it?

Hmmm? That seems to be a possible scenario that's developing as we head into the crucial final last week of campaigning. As many others are writing about today, the Nanos numbers today are showing the closest race yet: 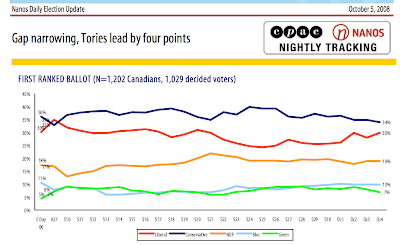 Andrew Coyne is writing about it. And Chantal Hebert is pointing to the Nanos downward trend for the Conservatives as well, and hinting at the notion of a coalition government.

In this last week, it's important that all polling information be provided to Canadian voters, whatever those numbers may be. The prominence each news agency is giving to their own contracted pollsters is shortchanging that principle. See for example this Canadian Press report today that does claim the race is tightening, but only reports its own pollster's findings, Decima. Is it too much to expect such a report to canvass all the polls in order to present an accurate picture of what's going on?
Posted by Nancy Leblanc at 10/05/2008 04:45:00 PM