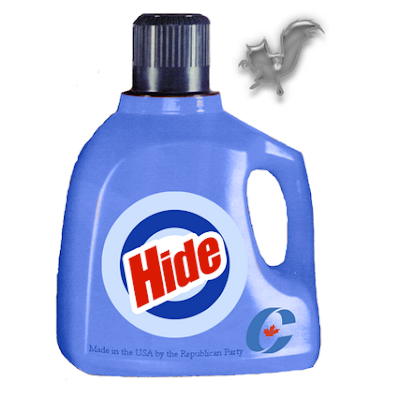 Say it ain't so, Harpie:

Less than two weeks before thousands of Conservatives from across the country flock to Winnipeg for their first policy convention since the Harper government took power, grassroots members still don't know what policy proposals they're going to discuss.

Under party rules, Conservative riding associations can submit amendments to the party's central policy declaration and constitution. A national policy committee has been sifting through the submissions, but has yet to send out the final list of amendments to be debated at the convention.

Party executives say the process was delayed by the campaign for the Oct. 14 election, which returned the Conservatives to power with a strengthened minority.

"Clearly, the election slowed some things down, in terms of the committee meeting and so forth," said Don Plett, president of the party's national council.

But some party members say it's an attempt to muzzle grassroots supporters who might espouse views that could embarrass the Harper government.

The party that prohibited candidates from attending all candidate forums during the election, that ran from the media, that limited the PM's access to the media...is certainly being consistent. In fact, it seems to be a little shy about what might creep out of the woodwork in the form of policy at its upcoming convention. As the report references, last time the Conservative men and women folk got together at one of these policy conventions, the higher-ups had to stifle debate on issues like same-sex marriage and abortion and this "outraged" the "social conservative wing."

This time around, there is similar tension in the air:

...there are signs that not everyone involved is happy with Harper's efforts to build a bigger coalition by moving the party to the left. Some activists fear that in doing what is necessary to seize and to maintain power, the party has abandoned the commitment to grassroots democracy of the original Reformers.

"There's the sense that they are making progress, because they are increasing their seat total in the House of Commons," said Gerry Nicholls, a senior fellow at the Democratic Institute who frequently criticizes the Conservatives for abandoning their principles. "But I also think there will be an underlying sense of frustration among some people that the party isn't going fast enough in pursuing a small-c conservative agenda. And I think a particular point of frustration will be Quebec, because they did so much to pander to soft nationalists and had nothing to show for it." (emphasis added)