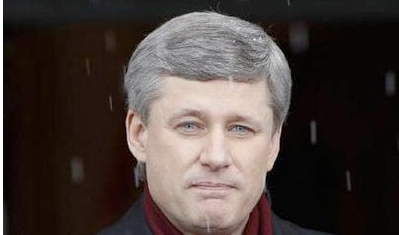 Insert for thought bubble: "What have I done?"
First, a bit on the political fallout of what the PM has done in seeking and now having been granted a prorogation of the House of Commons. Unanimous condemnation for Mr. Harper from the parties he is supposed to now re-engage and win confidence from for a coming January confidence vote:

"We must realize the enormity of what has happened here today. For the first time in the history of Canada, the Prime Minister of Canada is running away from the Parliament of Canada."

"I cannot have confidence in a Prime Minister who would throw the locks on the door of this place, knowing that he's about to lose a vote in the House of Commons," Mr. Layton said. "That's denying about as fundamental a right as one has in a democracy."

"We don't believe him and we don't have confidence in him."

Mr. Harper is now a scarred, historically tarnished Prime Minister. The first in a long line of Prime Ministers in a similar position to seek a dismissal of parliament when he faced defeat. A Conservative Prime Minister did this. His party will be ruminating on the brinkmanship he's engaged in, the foolishness of his ideological economic update in the economic context into which it was dropped. How about the money he's costing them? How much has to be spent to fight Stephen Harper's wars? Cadman? Now countless dollars on a blitz to sustain his position. It would be astounding if they didn't care and there's been plenty of evidence in the form of newly willing Conservative insiders speaking to media to suggest they do. His leadership is in question and it's a very reasonable belief to say that it's the beginning of the end for him. So congratulations, Mr. Harper, for the moment, you have won an epically Pyrrhic victory. Weakened in the eyes of his own party, the opposition parties, and in a notable region of the country, Quebec.

Second, the Governor General was put in an untenable position by Mr. Harper. There was no consensus option for her. In the face of divided expert opinion, she opted for the default Governor General response. (Oh to have been a fly on the wall in Rideau Hall today.) Harper bears full responsibility for the constitutional precedent he has created (h/t). We count on our Prime Ministers to operate within the generally accepted rules of our constitutional framework. To act in a manner that is consistent with democratic principles, the rules of the game that Prime Ministers before him have respected. To speak on national television to Canadians about the democratic options facing the nation truthfully. We can't count on such things with Stephen Harper. His request to prorogue is just the most recent major incident in that regard. It is difficult to imagine that this prorogue request will go down in constitutional history as anything but an error on a prime minister's part, filed under things a prime minister should never do. Here is a suggestion to ensure it doesn't happen again:

Mendes says Parliament should pass legislation to prevent abuse of the prorogation in the future.

This came to mind, not fully applicable, but there is a sentiment here that is echoing today...

"Why does this remind me of signing statements and Congress having to think about enacting laws to prevent similar abuses that Bush used to subvert democracy?

These two are cut from the same cloth, except Harper is more devious - unfortunately for us."