Everything you need to know about Stephen Harper... 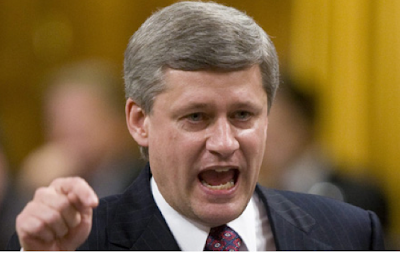 Was on display in his overblown address to the nation tonight as angry/incredulous Stephen showed up to misinform Canadians:

"At a time like this, a coalition with the separatists cannot help Canada," he said, flanked by two Canadian flags.

"And the Opposition does not have the democratic right to impose a coalition with the separatists they promised voters would never happen."

In fact, every constitutional experts has said the coalition is legal and legitimate.

Yes, it is. There are the things he says and then there are the things that experts say. He's flat out wrong. The coalition has the legitimacy of every vote given on October 14th to the majority of members that outnumber Conservative members.

In a pre-taped rebuttal broadcast shortly after Harper's address, Dion defended the notion of a proposed coalition government "as normal and current practice in many parts of the world."

Moreover, the Conservatives have lost the confidence of the majority of members of the House of Commons, meaning "they have lost the right to govern," Dion said.

In our parliamentary democracy, that's the way it works. Canadians need to suck it up and get used to coalitions working together. We have had minority government since 2004 and what we're seeing now is a progression out of the results Canadians have consistently given in successive elections. Whining about the government being defeated on a confidence vote is offensive to our traditions. We haven't seen it in a while, but it certainly doesn't mean it's "undemocratic."

Mr. Harper has sown the imminent defeat of his government. He should act in the tradition of great parliamentarians before him who have similarly faced the prospect of defeat. Be a democrat and allow a vote. Be a leader and take your result. Anything less and he's consigned to go down in history fighting for his job by inflaming the nation and corrupting our democratic traditions.
Posted by Nancy Leblanc at 12/03/2008 08:56:00 PM