Couldn't be happening to a more deserving fella...must see footage for posterity. From the NY Times:

But his appearance at a news conference here was interrupted by an Iraqi journalist who shouted in Arabic — “This is a gift from the Iraqis; this is the farewell kiss, you dog” — and threw one of his shoes at the president, who ducked and narrowly avoided being struck.

As chaos ensued, he threw his other shoe, shouting, “This is from the widows, the orphans and those who were killed in Iraq.” The second shoe also narrowly missed Mr. Bush as Prime Minister Nuri Kamal al-Maliki stuck out a hand in front of the president’s face to help shield him.

As Bush departs from office with his many disasters in his trail, this episode seems about right... 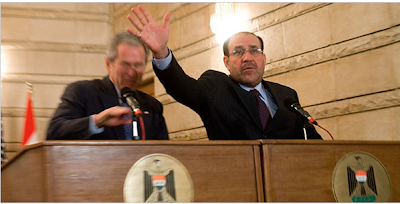 AP with the significance of the shoes:

In Iraqi culture, throwing shoes at someone is a sign of contempt. Iraqis whacked a statue of Saddam with their shoes after U.S. marines toppled it to the ground following the 2003 invasion.

White House press secretary Dana Perino suffered an eye injury in the news conference melee. Bush brushed off the incident, comparing it to political protests at home.
"So what if I guy threw his shoe at me?" he said.