Detour to the U.S. for this interesting development. There is a report circulating that the N.Y. governor might choose a big-name place holder for Hillary Clinton's about to be open Senate seat. That would mean the individual would keep the seat warm just until a real winner could claim it in a 2010 Senate election with a primary leading up to it. There are a few high profile names included in the report, among them President Clinton and former Governor Mario Cuomo. Since Cuomo is the father of one of the Senate seat seekers, Andrew Cuomo, I doubt we'd see papa Cuomo in the seat. And Bill Clinton has enough on his plate, doesn't he? There are others, however, who could do it.

The N.Y. Senate manoeuvrings are starting to put pressure on the governor, and this caretaker option now being floated could be a viable way out of the maelstrom developing. The last thing that is needed in Democratic politics in the U.S. right now is another chaotic Senate appointment. I still believe Caroline Kennedy would be a good bet to win the seat in a few years if she were required to wait while this caretaker minds the store in any event. Like it or not, it's reality that she's got the stuff that counts in the U.S. these days, money raising ability, name and significant supporters like Mayor Bloomberg. And put me down as one who believes that the minimization of her qualifications is not justified. Chances are good that she'd exceed present expectations and defeat other Democratic challengers for all the, you know, aforementioned factors. But there are enough candidates who are equally credible and present solid credentials for that seat, including N.Y. Attorney General Andrew Cuomo and U.S. House Representative Carolyn Maloney, among others. With all of these candidates now informally running and putting up their flags, the governor may not have a choice but to put in a place holder and let them fight it out in a Democratic primary. That seems like the more responsible course at this point.

There is legality and then there is the ever important concept of legitimacy that must be factored in as well. Blagojevich did what is technically legal but has highly questionable legitimacy. His pick is now suffering the fallout. Paterson, by picking the place holder route, can ensure legality and legitimacy. When the two go hand in hand, that's a good indicator of the route to follow.

Speaking of one of the rumoured place holders, did you see this last night? They looked pretty good and darn happy. I wouldn't mind seeing Bubba in the Senate! 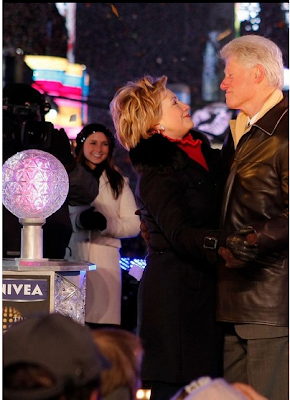 More reading on this: a plea for the governor to act decisively and soon, the right wing suddenly has a reason to support Kennedy, another in favour of the place holder.