Criminal justice posturing from the PM 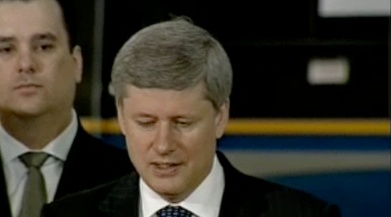 From the PM in B.C. today while announcing his crime sentencing proposals, in the midst of a troubled community struggling with gang warfare...there's always time for a shot at the opposition:

"The truth of the matter is, those who say that the tougher penalties on perpetrators will not work don’t want them to work because they don’t believe in his kind of approach," he told reporters.

Shortly after the prime minister spoke, the Liberals and NDP announced they would support the bill in principle, while also criticizing the Tories for not going far enough in terms of crime prevention.

The Bloc is also expressing support. But here's more of the "soft-on-crime" reaction to rebut Harper's manipulation of the opposition positions:

"We support the bill in principle, but we believe that this bill could have been done earlier and it doesn’t really create any new offences," Dosanjh said.

"This government has absolutely, miserably failed in advancing our agenda, the Canadian agenda, on crime prevention."

NDP justice critic Joe Comartin called on the Conservatives to fast-track the bill into law, saying it is consistent with themes that his party have supported in past elections.

"We will be supporting it and we will be pushing it through the House as fast as we can," Comartin said.

But he also called for more action to be taken as part of a comprehensive strategy, including more police officers on the street, especially in the Metro Vancouver area, as well as more diversion projects for youths at risk of joining gangs.

Remarkable to watch how many times the PM said "soft on crime" today, boldly attributing this position to the opposition in the midst of this violence. Watch the clip, he's in fine form. Even a mention of the "coalition" makes an appearance. Talking point governance in action.

Mr. Harper's been on watch for years now and at the height of media coverage on gang shootings out in BC, swoops in to announce such measures that experts rightfully point out are dubious:

Critics such as University of Ottawa criminologist Irvin Waller say that more jail time will not curb the kind of violence that the government wants to bring to a screeching halt.

"This is yet again a debate about penalties when it's very clear from looking south of the border that these penalties do not make a lot of difference to the number of people killed," Waller told The Canadian Press earlier this week.

"It's not a debate about what will actually stop them from happening."

Who is really the "soft" actor in this picture? Sounds like it's the leader who chooses to posture about enacting window dressing that will likely make no difference to the violence on the ground.

While people in B.C. are justifiably nervous about what's happening and likely are heartened to be receiving such attention, let's not avoid pointing out the obvious political motivation driving this legislation and the misrepresentations on the PM's part here in his characterization of the opposition. And an issue like this, causing such concern in the community where people are being gunned down in their cars, doesn't deserve to be accompanied by the cynicism and partisanship from the PM in his interactions with the media. Too much to ask from this PM again, I suppose...
Posted by Nancy Leblanc at 2/26/2009 06:05:00 PM