Mr. Harper and his storm clouds 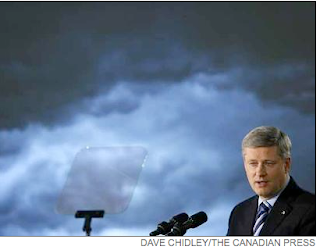 (CP) That has to be one of the most representative snapshots of Mr. Harper to date...

The PM's speech today in Cambridge was full of misrepresentations. Never able to stand on his own two feet and inspire Canadians about his own record, Mr. Harper must attack, attack, attack. Create straw men and fight imaginary battles everywhere. From a PM who openly told us in the fall that all was well, that "we are not going to go into deficit," now $50 billion plus in deficit later, his credibility is just shot. Nevertheless, here's the stuff he was peddling today:

On the other hand, every day in Parliament we face demands to change this course. We face demands from the Opposition to spend literally tens of billions of dollars more and to make stimulus spending permanent.

This is all pure nonsense. From the man who put Canada into a deficit before the recession began, with overspending and yes, reckless GST cuts, there's no reason to take lessons from him on economic management whatsoever. The Prime Minister remains in escapist and obfuscation mode. Weapon number one, scare the Canadian public about tax increases at every turn. So it's not surprising that in a nationally televised scripted event with pre-approved questions from a stacked audience and a sympathetic former tv host, that's the shtick we see.

For an interesting bit of reality in contrast to the fakery, look at the recent EKOS numbers (pdf) via FarNWide on the issues:

While the numbers are good across the board for the Liberals, what is particularly relevant with this poll, the issue orientated numbers. Canadians are asked to comment on importance of issues and who is best able to deal with them. The overall score on issues gives the Liberals a substantial lead:

Which party is best able to deal with these issues, overall score?

Of particular importance, on the question of jobs and unemployment, the Liberals lead 41% to 31%. That suggests real erosion on the last remaining "strong suit" for the Conservatives, managing the economy. We also see the two parties basically tied on the question of who is best able to deal with the deficit.

There are many reasons why Canadians are turning away from this incompetent government, the most recent being the medical isotope shortage. Today's economic song and dance event reminds us that it all starts with the propagandist in chief.

Update (6:15 p.m.): In case you want the Coles notes version of today, they gave themselves an "A" but with a big caveat...80% of projects "being implemented." On that note, see this, some interesting photos of the implementation.

The touted 80 per cent overall implementation rate includes 100 per cent implementation of things like the home renovation tax credit, although the government has no idea yet how many homeowners may actually take advantage of it.

On infrastructure, the government's own accounting shows less rosy results.

Only about 42 per cent of the $3.2 billion earmarked this year for the provinces and municipalities has actually been committed, and even less has been spent.

And for infrastructure projects entirely under federal jurisdiction, the number is even lower - 34 per cent of $960 million - with even less spent so far.