"The war room is being staffed up, the airplane is booked, buses are being readied, and the campaign strategy and platform are being developed," a Tory source told The Hill Times based on briefings provided to Conservative MPs at their recent national caucus meetings.

Part of very loud posturing to make the opposition parties cower before the great Conservative election machine. Perhaps they should be paying more attention to the issues of the day, however, and governing. While they may brag of war room staffers, there's another side to the coin. Nobody wants to jump on board with the S.S. Harper, as CP reported yesterday. 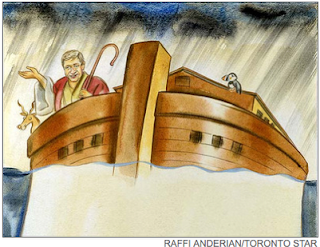 (Star)
They're having trouble finding chiefs of staff for three ministers at the moment, including the newest employer on the block, Lisa Raitt, minister of Natural Resources and lost documents. Seems that the prospect of losing the government and the stifling control from the PMO is keeping the talent away in droves. It's all part of that "Stephen Harper: Leadership" thing of attracting the best and brightest...not.

So, no luck in recruiting key players for the actual business of governing, but that war room's staffed, that's for darned sure. Priorities, priorities...
Posted by Nancy Leblanc at 6/08/2009 08:26:00 AM