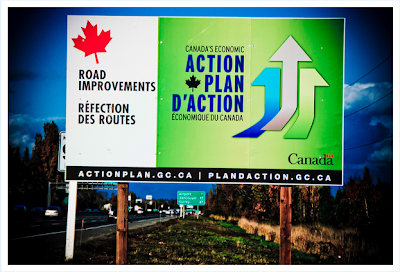 Le Devoir reports today on the costs of the signage going up around the country to promote infrastructure spending. The signs cost between $800 - $7,000 apiece. 2,500 signs have been installed with 4,000 more on order. The total cost estimate ranges between $5 to $45 million, quite a range. If the cost is on the higher end of the spectrum, that would be fairly significant. Add that to the $56 million on other advertising that's been estimated for January to June, extrapolate for the last six months of this year (another $50?) and throw in the cost of these signs...could we be in the rarefied neighbourhood of $150 million on advertising for the action plan?

So the instance Wayne Easter cited a few weeks back, of a sign going up in front of the Charlottetown RCMP detachment for doorknob hardware repair would probably be one where the sign cost more than the work being done. The above sign along a road in B.C. has apparently been placed there for roadwork already completed.