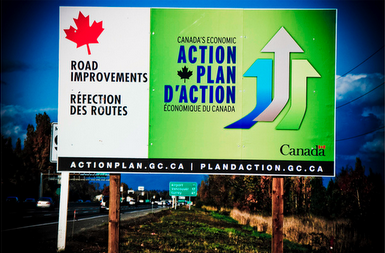 There's one of the B.C. signs above, part of the B.C. Action Plan signage that is being farmed out to a U.S. company:

A member of the B.C. legislature wants to know why the provincial government is paying a Washington state company to make road signs extolling Canadian stimulus spending.

...the roads signs were made by Zumar Industries from Tacoma, Wash., which has received more than $1 million in work from the B.C. government in the last four years, she said.

This is the fallout from the Harper Government's promotional requirements that they've imposed on municipalities and provinces in connection with the stimulus spending. Those levels of government are required to pick up a big part of the tab for the federal initiative. As FarAndWide pointed out last week, this is a neat trick, the Harper Conservatives are forcing local taxpayers to pay for such promotional signs. Now they know, in B.C., that these moneys are being spent in the U.S. What a wasteful expenditure of taxpayer dollars.
Posted by Nancy Leblanc at 11/09/2009 06:22:00 PM