Just when you think Conservatives couldn't go any lower...

They do with advertising on our dollar that pursues a vile form of politics, accusing Liberals of anti-Semitism. Part of the Conservatives' ongoing effort to corner the Jewish vote, some of the most offensive ten percenter flyers to date have been sent out:

The "scandalous" flyers, endorsed by Prime Minister Stephen Harper and which target ridings with large Jewish communities, accuse the Liberals of participating in an anti-Semitic conference in Durban, supporting terrorist groups Hamas and Hezbollah and specifically go after Liberal Leader Michael Ignatieff for accusing Israel of committing war crimes.

Here's a guy who has a lot of credibility to speak to this and bat this nonsense back:

"This is totally misleading, it's false ... and it basically seeks to associate the Liberal Party with anti-Semitism. This is shocking ... this has no place in Canadian politics," Cotler said.

The former Liberal attorney general noted it was a Liberal government in 2002 that banned financial support to Hamas and Hezbollah.

"Let the facts show ... that it was the Liberal Party in 2002 ... (that) listed Hamas and Hezbollah as terrorist organizations. This notion that we somehow sought the delisting of Hezbollah or somehow (we are) indulging terrorism is a scandalous misrepresentation," Cotler said.

The reference to Durban, the controversial UN World Conference against Racism held from Aug. 31 to Sept. 8, 2001, in Durban, South Africa, which provided a platform for anti-Israeli sentiment, is also misleading, the Liberals said.

Cotler said he went to Durban 1 as an observer and noted that the then-Israeli government specifically asked Canada to remain at the conference "and make its voice felt and bear witness to what was happening."

He described the Tory flyer as a "scandalous misrepresentation" of the facts.

Cotler said Ignatieff did accuse Israel of committing war crimes in one instance during the 2006 conflict in Lebanon but later publicly apologized.

What do you say about a government that seeks electoral advantage by trying to pick off voting blocks by appealing to group insecurities, here by appealing to the worst of sentiments? It's head shaking, sad and maddening all at once. The non-stop Conservative electoral campaign knows absolutely no bounds of decency.

Look at the big smile, he stands fully behind his material: 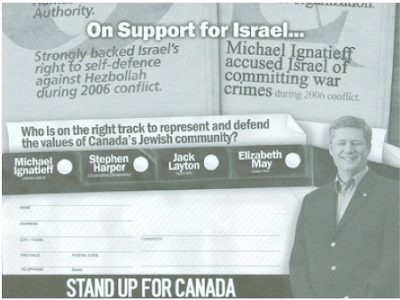