Plenty of reasons to support the gun registry

Some reading on that front today:

"MPs are way off target."

"If Long Gun Registry Is So Dumb, Why Do Police Like It?"

And then there is the unspoken influence of the NRA here that is worth considering. Here is an excerpt from a research paper on the ties of Conservatives to U.S. groups, here focussing on the NRA (see pgs 15-17 of the pdf for expansion of the point, click excerpt below to enlarge): 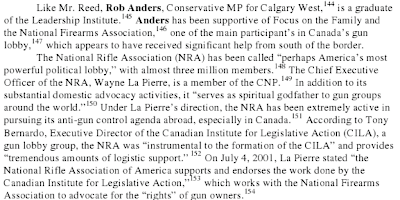 The Tyee piece on police support for the registry notes the NRA flavoured Conservative ad campaign that ran recently against targeted opposition members:

But while the Liberals and NDP were gutless in allowing a "free" vote of their MPs, it was shameful Conservative Party attack ads targeting rural Liberal and NDP MPs that likely pushed the vote over the top.

The radio ads and flyers were based on National Rifle Association tactics in the United States to pressure British Columbia Liberal MP Keith Martin and NDP MPs Nathan Cullen and Alex Atamanenko in their constituencies to vote to kill the registry.

We should seriously consider whether we want NRA style tactics to be shaping our political debates, particularly on this issue, and what it says about us to be giving in to them.

As Scott pointed out the other day, there is still lots of time for this bill's present path to change as compelling witnesses appear at the committee and public opposition develops. The opposition really needs to wake up here to what it's doing...
Posted by Nancy Leblanc at 11/10/2009 10:30:00 AM