Control freaks and new frontiers, sentiments of the season 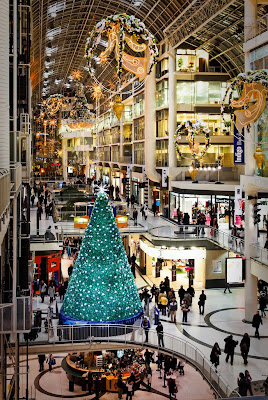 Hope you're finished with Christmas shopping and planning and can move on to other things, with family or whatever you may be doing for the next few days. We Torontonians will be enjoying rain and freezing rain, no white Christmas. Nice.

If you're looking for political thinking today, there's Travers on the plight of the watchdog under Stephen Harper's tenure with some Christmas tidings on the PM:

Opposition parties, having experienced the madness of his methods, wonder aloud how far beyond silencing critics and suspending Parliament the Prime Minister will go to have his way. Even some Conservatives now refer privately to Harper as a control freak.

Lawrence Martin is feeling the season too, all optimistic about next year and what not. It is interesting the way he recaps the year, briefly, and notes achievements of Chretien, Martin but there's no comparable note of achievement for Mr. Harper that is cited, except the piano playing act. Interesting how that is all that is coming to mind to those looking back. Yes, what did he do, let us rack our brains. After mentioning Obama's year, Martin ends with this:

On Christmas Eve, such noble thoughts as that arise. It is the year's greatest day of anticipation, a day when the glimmers of optimism reach beyond the radiant faces of children to all ages. In 2009, we moved past the big scares. It was a year of survival. In 2010, more is promised. Recovery begins in earnest. New frontiers beckon.

It would be nice to think that 2010 will be better politically, with "new frontiers," as hard as that is to see given how the year is ending. But Martin's sentiment is probably a good end note for today.

Enough politics for now, seasonal music, but of course...