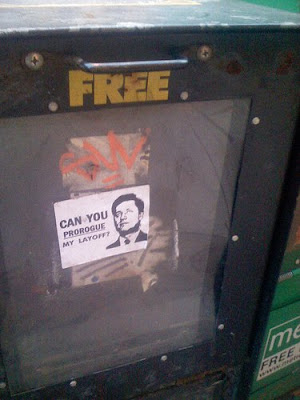 A few things on the rumoured prorogation. A PMO spokesman did deny it flatly last week:

Andrew MacDougall, a spokesman for Prime Minister Stephen Harper, brushed it off as the rumor mill at work, saying "we don't speculate on that stuff, on what the government might or might not do."

MacDougall said Parliament will return from the six-week Christmas break on Jan. 25, as scheduled.

So I guess we should take their word for it. Anyway...

Just in case you were wondering and wanted to know the impact a prorogation would have on any private member bills that are in the committee stage, e.g., the gun registry bill, the Standing Orders say they come back as is:

86.1 At the beginning of the second or a subsequent session of a Parliament, all items of Private Members’ Business originating in the House of Commons that were listed on the Order Paper during the previous session shall be deemed to have been considered and approved at all stages completed at the time of prorogation and shall stand, if necessary, on the Order Paper or, as the case may be, referred to committee and the List for the Consideration of Private Members’ Business and the order of precedence established pursuant to Standing Order 87 shall continue from session to session.

More for the wonks, the plain English version:

Prorogation of a session usually brings to an end all proceedings before Parliament. Unfinished business “dies” on the Order Paper and must be started anew in a subsequent session. The provisions of Standing Order 86.1, however, mean that prorogation has almost no practical effect on Private Members’ Business. The List for the Consideration of Private Members’ Business, established at the beginning of a Parliament, and the order of precedence, established pursuant to Standing Order 87, continue from session to session. Private Members’ bills and motions, including motions for papers which have been transferred for debate, need not be reintroduced in a new session as they automatically are deemed to have passed all stages completed in the previous session and retain the same place on the Order Paper. Thus, items placed in the order of precedence remain there. Items designated as non-votable maintain that designation. Private Members’ bills are deemed to have been adopted at all stages of the legislative process agreed to in the previous session. If consideration of an item at a certain stage had begun but had not been completed, the item is restored at the beginning of that stage, as if no debate had yet occurred. [2] Bills that were referred to a committee in the previous session are deemed referred back to the same committee. For the purposes of Standing Order 97.1, the deadline for reporting a private Members’ bill from committee is 60 sitting days following the day it is deemed referred to the committee, normally the first day of the session. [3] For ease of reference, all bills and motions under Private Members’ Business retain the same number from session to session.

So, there is no silver lining on a prorogation in this respect. And the upside of the wily tactic of wrapping the gun registry bill in a Private Members' cloak is demonstrated once again.

Secondly, just wanted to draw attention to the Star's op-ed pages in the last few days. They're pushing Lawrence Martin's theme of our democratic deficit along. Really, Jim Travers has been doing that all year, but they're getting a bit more intense of late. Note this piece from Professor Emeritus Reg Whitaker on Friday, indicting the Harper government's defiance of the House of Commons order on production of documents in relation to the Afghan detainee issue.

If the Prime Minister is actually considering proroguing Parliament in a desperate attempt to keep the lid on, suspicion will turn into certainty: This must represent a cover-up of serious wrongdoing.

There is no reasonable explanation of why the Harper government has gone to such lengths to suppress these documents, other than fear for its own political well-being. If it wishes to allay such suspicions, it can take up any of the available opportunities to provide transparency without endangering national security. If it does not, the public will have to draw its own conclusions.

Then there was Jim Travers' column on Saturday, "The year of governing secretly," which is also worth a read.

And thirdly, this piece today, "Harper acting as though he is an elected dictator" which some have picked up on. Siddiqui offers another brilliant contribution to the growing chorus of voices standing up loudly to Stephen Harper.

Stephen Harper is centralizing power in the PMO on an unprecedented scale; defying Parliament (by refusing to comply with a Commons vote demanding the files on Afghan prisoner abuse); derailing public inquiries (by a parliamentary committee and the Military Police Complaints Commission); muzzling/firing civil servants; demonizing critics; and dragging the military into the line of partisan political fire.

Culminating in this recommendation to the Governor General on a present day rumoured prorogation:

She should flat-out refuse and not repeat her mistake from a year ago, when she got rolled by him.

There's more that's worth a read there, Siddiqui paints the picture that essentially makes the case for the Governor General to refuse prorogation on the basis of abuse of power. But given that last year in arguably a much more egregious situation, she agreed to prorogation, it's hard to see that she would refuse this time. There's a strong convention that a Prime Minister's advice be accepted if he/she has the confidence of the House of Commons. Difficult as that may be to stomach given the conduct we're witnessing. Still, very interesting argument that can't be dismissed out of hand and it's encouraging to see these editorial pages putting the case out there.
Posted by Nancy Leblanc at 12/20/2009 06:07:00 PM