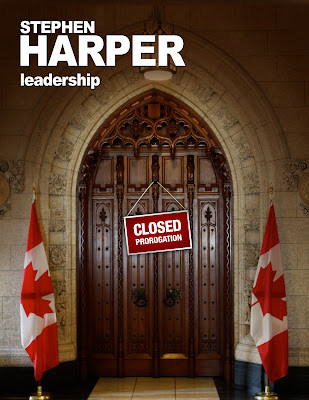 It's quite the record this Prime Minister is building for the history books. Prorogation may be a power a Prime Minister can exercise. Whether he or she should exercise it and the circumstances in which they do it, that's what distinguishes Mr. Harper from his predecessors. Twice within a year, Mr. Harper has chosen to run from facing the music. Run and hide Harper, that's for sure. The anti-democratic narrative Stephen Harper is building for himself is remarkable. There's a huge opening for a Government 2.0 platform.

But back to today's events, it's not about a lone incident of a detainee getting beaten by a shoe, as Stephen Taylor and Laurie Hawn and Harvie Andre would have you believe. That's part of the spin, minimizing the Afghan detainee issue. It's about the Prime Minister's actions here and now, in Canada. This Prime Minister and his timid followers are defying a Parliamentary order. That's virtually unprecedented and it won't go away because Stephen Harper is booking off for the Olympics in order to wave flags. It's not clear at this moment how that order will be pursued but it's there, sitting on the books and Stephen Harper has chosen to close down Parliament rather than deal with it. Those are the facts no matter what the spin is.

Speaking of which, the political power of the Prime Minister as evidenced in polls is irrelevant to that basic parliamentary issue. It's a backdrop, sure, it always is when assessing Conservative actions, it's how they make their decisions rather than in the best interests of the nation. But within the halls of Parliament, contempt of an order is for Parliament to deal with, by its own rules. The fact that we have a government that chooses how to act on rule of law issues by their standing in the polls, that's an affront to the rule of law, yes. It's also an issue for the electorate to deal with in the future.

It's high times in Canadian politics, we have the spectacle of a Prime Minister that chooses to defy constitutional conventions, Parliamentary orders...because he has the grey room in parliamentary convention to do so and money and political power at his back.