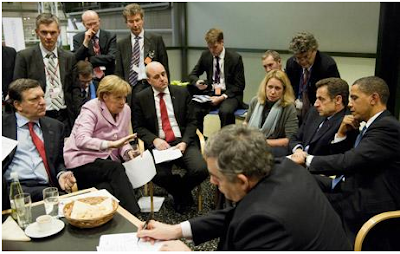 Is someone living to regret those words yet? You know, the stuff about us grilling steaks with the US and the UK instead of making waffles with the middle powers. Just wondering, 'cause this week showed Harper's Canada to be in a decidedly secondary, subservient role at a major international event. Excluded from key meetings on the last day. Is this where Canadians want to be, on the outside looking in? Is this where we have to be? No, not at all. Hopefully this was a key moment for Canadians which crystallized what it means to be represented by this government on the world stage.

Now that an agreement of some sort has been reached, look for the Harper gang to lash themselves to it and spin furiously. Although it's not clear how much spinning they'll have to do:

...the agreement is not binding and does not set new greenhouse-gas reduction targets. Instead, countries are to set their own emission-reduction commitments, which would not be legally binding.

Those commitments will be the subject of further negotiation, with the aim of a final deal at next year's summit in Mexico. It's a compromise following 12 days of divisive talks that saw hopes dwindle as the summit's close drew near.

And just for fun, watch White House Press Secretary Robert Gibbs intervene for the American press and get them in the meeting with the world leaders over Chinese objections, "no press, no press":

Update (7:45 p.m.): Just thinking about this more...China was clearly instrumental in obstructing and stickling. This is where Canada, having iced relations with China for the past four years, could have made a difference. Jean Chretien certainly wouldn't have had a problem reaching out to the Chinese to assist. Harper, however, clearly with no strong relationships having been built, was not really helpful at all. Canadians can judge that for themselves.
Posted by Nancy Leblanc at 12/18/2009 06:32:00 PM