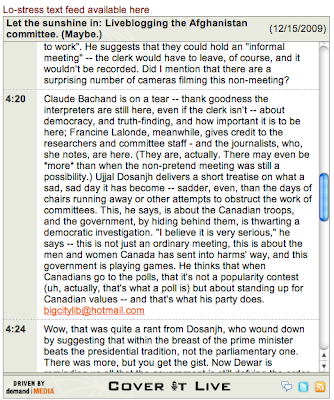 So, reading along and whoops, there it is...what gives? He's in our subconsciousness, everywhere:)

Update: Big City Lib was just on CBC Politics, this was likely the reason for the email address above. It wasn't subliminal advertising after all. Too bad.

Update II (8:25 p.m.): This incident today involving the Liberal website and the picture that was taken down spawned a lively debate for a bit on twitter tonight about civility in politics, etc. It's a topic worth pursuing. I wish the silly picture had not been posted because it detracts from a Liberal argument on raising the level of discourse, which I do believe is a legitimate one to make. There is one political party who has spent millions since the election of Stephane Dion as leader of the Liberal party, onwards into the Ignatieff leadership, to personally attack and destroy their political viability. There is nothing that has been done, comparable in recent political history in Canada, on that scale. So let's keep today's incident, unacceptable as it is, in perspective and not wave the "equivalency" flag too broadly as a result. There may have been some equivalency as between the photo today and the bullet ad run online by the Conservatives, but in the bigger picture, there's just no comparison. That's not to excuse at all, parties need to inspire Canadians and put aside such idiocy, no question.

Anyway, some quick additional thoughts, that's all. There's much more worth pursuing, notions of responsible citizenship, for example, but maybe for another day.
Posted by Nancy Leblanc at 12/15/2009 06:01:00 PM