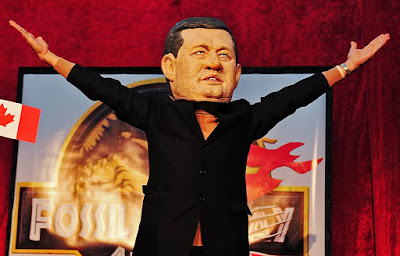 Just for fun...a shot of the Harper dummy, for lack of a better word, as he won the coveted prize at Copenhagen (click to enlarge). Captures a moment in time. It's not often that a Canadian Prime Minister is dummy-worthy at a major international event, after all. Although I do think the stubble effect is a little too pronounced.

Prentice now back home trying to sell the deal but the bad press continues:

Canadian negotiators, however, weren't invited to a meeting that included the U.S., China, Brazil, India and South Africa for the drafting of the final document. But Prentice said Canada didn't need a seat at the table for the 11th-hour bargaining session.

"Those were the countries that had to be in that room because the final issue that needed to be resolved was transparency in terms of the obligations by the developing countries," he said.

"Canada was not there because we are only responsible for two per cent of the world's emissions."

But Prentice's explanation did little to abate the criticism levelled against Canada during the two week U-N Conference in the Danish capital. Canada was bestowed with the dubious "Colossal Fossil" award by environmental groups during the conference. Canada was criticized by developing countries and environmentalists who accused the Conservative government of failing to make concessions to help reach a deal - and of relinquishing the country's historic role as a progressive on the world stage.