Damage control from the PM?

Headlines from yesterday: "20,000 join anti-prorogation Facebook group," "Proroguing Parliament will delay review of bills." And we know how things have been going prior to that, front page Globe editorials, feisty letters to the editor, etc.

Now word that the PM is to make a rare appearance on the National tonight. Hope Mansbridge is up for a good interview with plenty of follow-up questions to the usual spin. We don't need to hear any more about how prorogation is routine, how Liberal Senators are blocking legislation or about the Olympics. Olympics can go on without lengthy parliamentary breaks. The Senate point is a canard and there is a slew of legislation that's being turfed by his move, very unusual for minority governments to make.

I hope the cost question is put to him. How can he justify slashing human rights groups like KAIROS while he prorogues Parliament, effectively wasting all the time and effort in the last session? Time and effort that translates into wasted money. 37 of 64 bills have died. So how much, exactly, is the prorogation costing Canadians?

If not that question, specifically, I'll settle for a highly rigorous interview. Please. He deserves to be grilled on national television, right now. 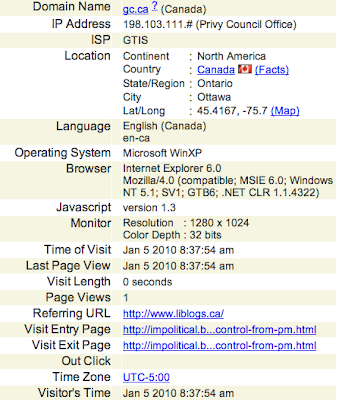 Update II (9:35 a.m.): Note today that constitutional experts Professor Errol Mendes and Professor Peter Russell are also speaking out against this prorogation. Both pieces worth a read. And one more reference, not of the constitutional expert variety, but a must see editorial cartoon as well.
Posted by Nancy Leblanc at 1/05/2010 08:15:00 AM