'Get back to work' 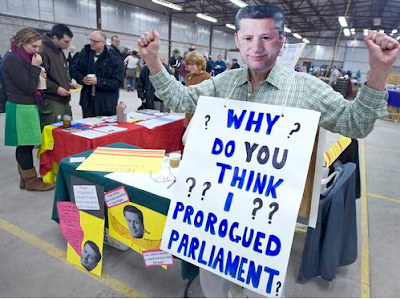 Love the photo ops from the creative citizens of Peterborough every once in a while. Apparently prorogation is not going down so well at the farmer's market as the linked article makes clear:

Barry Davidson has a strong message for Prime Minister Stephen Harper's government: Get back to work or you will "go down in flames" next election.

"We pay our MP's good money to be there," he said. "They're taking a holiday without our consent and paying themselves for it. We're the ones who are the suckers.

"Get back to work. That's what we hired you for."

Davidson was one of many farmers' market shoppers who voiced their frustration Saturday morning at the decision by Harper to prorogue Parliament until March 3.

Harper's on the radio on Monday at 4 pm for a Haiti telethon. That's perfectly fine and public fundraising should be supported. But perhaps he might think about how the Haiti issue could be better served by Parliament being open:

"If I was an opposition leader at this point in time, I would stand up and I would demand that the Prime Minister re-convene Parliament and introduce emergency legislation to permit extensive support for the reconstruction of Haiti," said Prof. Franks.