This is what you would call an antique ten percenter, from the riding of one Stephen Harper, MP, while Leader of the Opposition. 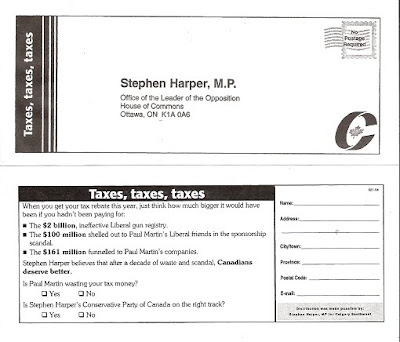 The above forerunner of the modern day ten percenter invective (we've clearly come a long way) was passed along by friend the Rural Canadian who offers these observations:

Couple of things to note even way back when he was in opposition the "MP for Calgary Southwest" was sending partisan mail out on the taxpayers dollar, in this case to the Owen Sound riding far from Calgary!
Second the figures given as "waste" are miniscule compared with his "waste" on advertising and parliamentary shutdowns he is now responsible for.
Thirdly even then I note that it was "Stephen Harpers" Conservative Party of Canada, a taste of thing to come eh!
And lastly Canadians do indeed deserve better ...... than the total disregard he has shown for our parliamentary democracy.

I would also throw in the cost of these ten percenter gems in the modern era. And a certain set of offenders who deserve special mention. The Conservatives, as a minority government, are outspending the larger opposition benches in their use of these flyers, $6.3 million to $3.8 million last year. Now there's a cut that could be made given the government's newfound interest in fiscal management. Lop $3 million off the Conservative self-promotion right there. Paging Mr. Day?
P.S. Somebody still has to get that guy hi-speed internet:) And he has a great post on the Owen Sound anti-prorogation rally.
Posted by Nancy Leblanc at 1/26/2010 06:38:00 AM