The "in and out" election advertising scheme ruling 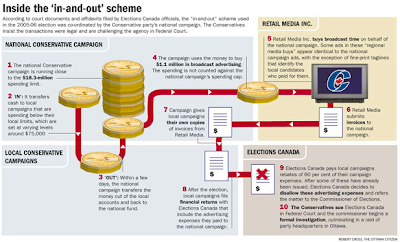 A few initial thoughts on the long awaited "in and out" judgment that came down yesterday. First off, see the graphic above for a very helpful explanation/reminder of what has been at issue in this case (h/t Pundits Guide). Here are the overview details from CP:

The federal Conservatives have won a court victory over Elections Canada in a case that saw Mounties raid Tory party headquarters over $1.2-million in contested advertising expenses during the 2006 federal election.

But the opposition says the court ruling won't end the controversy.

Federal Court Judge Luc Martineau on Monday rejected claims by Elections Canada that advertising expenses attributed to Tory candidates should have been reported as expenses for the national Conservative campaign.

The ruling means Elections Canada will have to reimburse 67 candidates for thousands of dollars each in campaign expenses.

It also means the Conservative party has dodged the prospect of having illegally exceeded its campaign spending limit by more than $1-million.

Still, Judge Martineau questioned the “legitimacy” of the so-called “in and out” advertising scheme because of the effect it could have on the fairness of electoral spending law.

The Conservatives appear to have won this particular battle, achieving the ability to skirt the national election spending limits by transferring funds "in and out" of local ridings and effectively undermining the national spending limit on federal parties in the process. What the ruling could mean is that a wealthy political party might outspend its opponents by millions in a federal campaign (as explained here). The wealthy party able to do that at the present moment is the Conservative party. The others just aren't there with them. So this ruling could be quite significant.

It remains to be seen, however, whether their larger war with Elections Canada on the point will be won. There may be an appeal from this judgment to the Federal Court of Appeal. After all, at issue is the integrity of the national spending limit regime under our elections law. It creates a level playing field among our political parties and that equal playing field in our elections regime is of utmost importance. It's something we've prided ourselves on as Canadians as we look to the money races that are ever escalating to our south. There are no Michael Bloomberg obscene elections here. It's not money and predominance in advertising wars during election campaigns that will (or should) win the day. Theoretically, anyway.

Theoretically, that is, because the Harper Conservatives have brought us the innovation of the never-ending negative advertising campaign. The degree to which they've done this is new in Canadian politics and its ongoing nature avoids the narrow election campaign period's spending limits. They do this because they have the money to do so, other parties have yet to catch up to their fundraising prowess, so they put it to use beyond the campaign period. In conjunction with the party financed never-ending ad campaign, we have also witnessed unprecedented government advertising from the Harper government, tinged with partisanship and timed for political advantage. So, all this is to say that this judgment, which will have the effect of letting the national campaign spending limits be breached, is not a good development if you are someone who believes in that equal playing field of election spending during elections. But spending outside of campaign periods and government advertising, those issues are challenges we face as well, courtesy of this government, that are also affecting the level playing field. It's almost quaint to hark back to this judgment and how it applies only during election campaigns given the ongoing advertising limit-pushing we've seen from the Harper party and government.

This "win" may be tempered somewhat by the judgment's holding that the "in and out" transfers will have to exhibit some real relationship between the expense allocation and the market value of ads (or other item) received by a local campaign. That takes away, to an extent, the ability to dump whatever expense amounts the national campaign decides into a given local budget based solely on how much room is available in that local budget. But it will still permit the "in and out" tactic to occur. The Conservatives will just have to be more clever in executing it next time around.

In the CP report linked to above, Pierre Poilievre is quoted as follows:

Conservative MP Pierre Poilievre called it a “devastating blow” to Elections Canada and a “total vindication” for the party, claiming Elections Canada has wasted more than $1-million on its parallel investigation into the advertising.

These Conservatives, particularly the Prime Minister's parliamentary secretary, really should have a sense that they are in government and comments such as this undermine, inappropriately, the integrity of our independent institutions. It's clear that they don't care but it must be pointed out how corrosive their attitude is toward such foundational democratic institutions as Elections Canada. The dispute was merited. The Conservatives were exploiting a loophole in the system that no other parties thought appropriate to do, nor did they. Elections Canada's actions were appropriate in the circumstance, based on the spending limits in place and having been presented with an unorthodox effort to work around them.

Further, this win doesn't detract from the simple fact that the Conservatives are putting the taxpayer to extra expense by executing the "in and out" system as they did in 2006 and will no doubt seek to do in the next federal election. The national moneys transferred in and out of the local ridings often stayed in the local accounts just for a matter of hours. Yet those moneys form the basis of expense recoupment claims by these local candidates from taxpayers. Does it seem legitimate that a local hypothetical candidate should be able to get moneys back from the taxpayer, for e.g., 60% of a hypothetical $20,000 amount that goes in and out of their campaign for just a few hours? That hypothetical candidate would get $12,000 from the taxpayer as a result of this national party transfer. Those local candidates who benefit from their local budgets being topped up in this way will therefore start the next campaign with a leg up on their competition thanks to this additional boost, and on the taxpayer's back of course. It's so ironic. The Conservatives recently touted their disapproval of the concept of "double dipping" in another elections law case as an affront to the taxpayer. But their high ground appeals are clearly situational.

There's more reading on this today, a critical editorial on the ruling.

This result may be a technical "win," yet it furthers along the present day narrative of a self-interested government, using every possible tool for its political advantage, in this case, the electoral laws.
Posted by Nancy Leblanc at 1/19/2010 07:51:00 AM