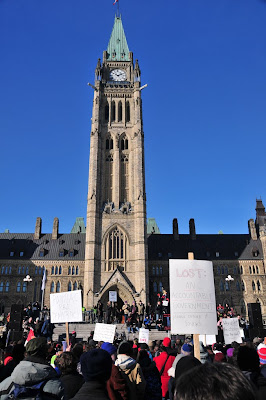 The Globe has another editorial that hits the right note for today's infamous moment in recent parliamentary history:

“Many of our most serious problems as a country can be traced to the apathy and non-involvement of Canadians in public affairs, and to decisions that too frequently ignore the popular will…. We believe in accountability of elected representatives to the people who elect them, and that the duty of elected members to their constituents should supersede their obligations to their political parties.”

Stephen Harper wrote that. The words are from the 1988 platform he penned as policy director for the nascent Reform Party.

As Prime Minister, Mr. Harper has eroded the institution his party sought to defend. He is not the first prime minister to do so. But Mr. Harper has gone to new lengths, using prerogative powers to shut Parliament itself. MPs – the tribunes of the people – have accepted each incursion on their authority, regardless of party stripe.

Today, Parliament is closed, while Canadians hang on to the notion that they live under a parliamentary system of government. We don't elect our prime minister, we elect our MPs to form a government, and then to hold the prime minister and his ministers to account. But the present reality is one in which the executive increasingly directs the activities of the legislature. That's something at odds with the ideals on which the country, and the Reform-Conservative tradition, were built. Canadians have taken notice.

That's probably enough of a mirror to hold up to Mr. Harper today as parliamentarians return to work in the shadow of that shuttered Parliament. But let's also consider what it might mean in a more practical political sense as well.

The above editorial is about Harper's breach of the democratic values he has historically espoused but has now abandoned. He's also stepped on his own carefully crafted politically oriented values messaging as well. We've just heard the chants across the country directed at Harper, "get back to work." This is terribly ironic considering that the Conservatives never miss a chance to attempt to portray themselves as the party of the "average Canadian," emphasizing Tim Horton's, hockey, etc. That's been a big part of their messaging, portraying Harper as the guy who's most like the average Canadian, in contrast to the Liberal leaders, for example, that they've tried to portray as out of touch with average Canadians. This prorogation has gravely undermined that messaging. If Harper's snub of Parliament isn't elitist, what is? We'll all be able to see who's going back to work today, in Parliament, the official place of business for our MPs.

The privilege of getting paid without having to be accountable to Parliament, to do the normal job they are supposed to do, it appears to have really sunk in with Canadians as embodying the opposite of Canadian values. They have made themselves vulnerable on "values" issues in more ways than one.
Posted by Nancy Leblanc at 1/25/2010 07:15:00 AM