The foto of the day

This CBC item seems innocent enough but it's really something worth thinking about. They draw attention to the latest Harper prime ministerial "photo of the day," a feature on the PM's website that seems to be a new thing. Here's the latest photo with their caption below: 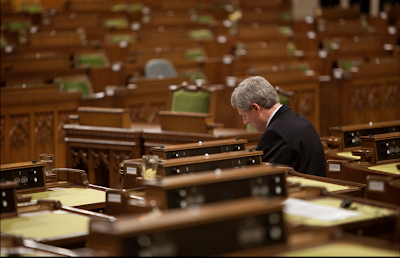 "Prime Minister Stephen Harper spends a few extra moments in the House of Commons following the last vote before the summer break on Parliament Hill. June 17, 2010."

Looking at that photo, you might be given the impression that the House of Commons is some kind of refuge for the PM. That he likes to work there when others have left. That it's a natural place for him to be, beloved for some reason. This, we know, would be pure bunk. The contempt that has been displayed for Parliament by this Prime Minister during this session, first through prorogation, then through committee disruption operations, onwards through the foot dragging on Parliament's rights to see the Afghan detainee documents, has been a looming theme hanging over the session. What cheek then, on the last day of the parliamentary session, to show this PM working at his desk to close it off.

Of course, most people who happen upon the website may not have such thoughts and may just think, gee, he works hard. That would probably be the majority of people and this is why they do it.