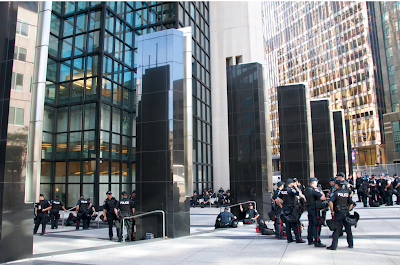 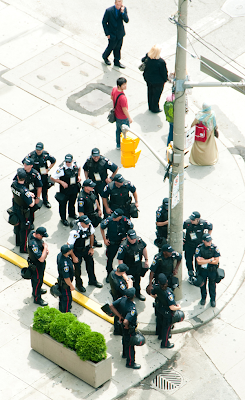 We even do the G20 Matrix-style! 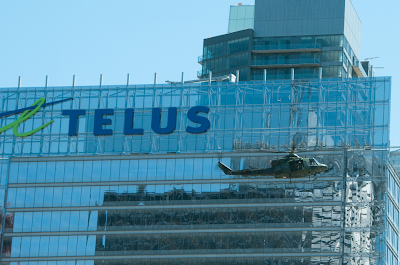 The upcoming G8 and G20 summits in Huntsville, Ont., and Toronto do not appear to be the subject of terrorist chatter, the head of Canada's spy agency said Monday.

"I think [there is] surprisingly little on the terrorism front," Richard Fadden, the director of the Canadian Security Intelligence Service told the CBC's Peter Mansbridge in an exclusive interview. "We don't think there is anyone who is really interested in doing any harm from that perspective."

Huh. Think he knows a thing or two about this stuff.

3. Bit of a downer for Jimmer: "Flaherty steps back from contingent capital idea." Nobody likes his big G20 plan for an alternative to a bank tax. Paul Volcker stomped all over it, politely, two weeks ago, giving it effectively the kiss of death:

While in favour of contingent capital, Mr. Volcker stopped short of saying that he believed it would work. He said the concept has been around for 30 years, yet has never taken off.

Mr. Volcker said sophisticated investors tell him the market for such a security would be severely “constricted,” presenting challenges to any bank hoping to sell contingent capital at a favourable price. There’s also a legitimate question whether enough contingent capital could be sold to make a difference if a bank were seriously strained. If a bank is so strained that its only avenue to raise funds is to convert its own debt, then it’s probably too late, Mr. Volcker said.

“It might make the funeral look a little different, but it’s going to be a funeral anyway,” Mr. Volcker said.

Volcker effectively dismissed the idea as tired and unworkable, one of the few voices of opposition we heard in this country to the contingent capital idea and Volcker is an American. So now, the Flaherty retreat is in full swing! Maybe Jim should be turning his mind to that financial transactions tax thingy anyway.

4. How do the police get away with introducing a water cannon at this stage, after they've been challenged on the sound cannons in court, with one of the arguments being that the province must approve of new weapons used by police? Secondly, there are clearly injury considerations with these cannons as well (why is everything a cannon by the way). So how does the water cannon suddenly emerge out of nowhere, days before the summit is to begin, when presumably similar considerations about its use would apply? Quite the scene.
Posted by Nancy Leblanc at 6/22/2010 09:01:00 AM