2. The decision on the injunction to ban police from using the sound cannons during the G20 is to come on Friday after hearings today. Best report today seems to be this one.

3. Some pics from fortress Toronto today...police still travelling in packs and with lunches! 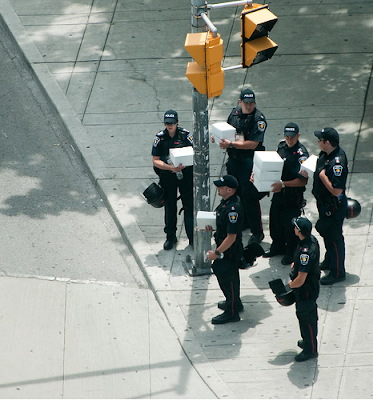 4. In other earth shaking news, this Star report on the arrest of a Toronto man in the lead up to the G20 notes the publication ban in effect but does give details on Byron Sonne's employment as a "respected computer security specialist" and someone interested in the G20 costs and security effort.

The man arrested on G20-related charges Tuesday night was reportedly planning to monitor police scanners during the summit and feed information to protesters.

“He was more critical of the whole circus, as it were,” Hirsh recalled. “I would definitely put him in the camp of people who felt the billion plus dollars (in security costs) was scandalous.”

Hirsh said he suspects Sonne’s arrest may have stemmed from his plans to monitor and disseminate police information. He also said Sonne could have been deliberately baiting security officials; at the same May meeting, Donne mentioned he was testing security officials by purchasing items online he knew would raise red flags.

“I suspect that this may just be a stunt and perhaps a stunt that got out of hand,” Hirsh said.

The Criminal Code defines the charges as including “sending false messages . . . with intent to provoke a state of fear in a group of persons or the public.” The mischief charges include computer data as property, while “weapons dangerous” is a general category for weapons that aren’t guns or knives.

"Bomb plot" as hyped by AFP or largely mischief? The context seems instructive but there is a publication ban so we don't know all the details.

5. Oh, I'm sure this is all perfectly normal, give in to the spin! "PMO foreign policy adviser leaves ahead of G8, G20 summits." Everything that happens in the PMO is according to plan!

6. The Parliamentary Budget Office is weighing in on the G8/G20 costs. Being cautious yet still underscoring the historic costs of these events.

...Page found that the Huntsville G8 costs are at least in the same ball-park as the 2002 event, once inflation is taken into consideration.

That can't be said for Toronto, where costs are expected to escalate to about $600 million, about twice the publicly-available accounting of past summits in other parts of the world.

Much more to come on this, that's for sure.

Update (8:25 p.m.): Apparently the NDP news conference was supposed to be G20 related in part. Noted and confirmed that it was a proper part then of the late aft G20 round-up!